When Smith first asked me to write these blogs,

I was not enthusiastic about it, but I’ve actually enjoyed reflecting on each week and I’m delighted that others have liked reading them. It’s hard to think my final season of cross country is over already. On Monday before States, we did a workout that involved running comfortably hard on River Road for a measured mile. After this, everyone ran some controlled 800s to round off the day. Typically, several people roll through the mile surprised after they stop their watches. Running just comfortably hard, individuals PR left and right as we near the end of the season. I myself was less than ten seconds from my PR.

The majority of the week was filled with easy runs and Smith warning the rowdy boys not to do anything stupid to get injured. On Wednesday however, we ran a final bit of speed work on the track. The weather was not at all in our favor; pouring rain, and chilling winds left my hands numb. Everyone churned out some 300s at goal pace and eagerly went on cool down to get back inside out of the cold. That night, the team reunited for one of my favorite nights of the season.

The week before states each year, Smith holds a team dinner at his house less than a minute from the school. He provides the pasta and everyone else brings chips, drinks, and desserts. This year with about twenty members, it was a bit crowded to say the least. Dinner is quickly consumed, and before you know it dessert is starting and the legendary Traffie family Nisu is quickly disappearing; it’s worth fighting for every last piece you can get your hands on. Once everyone has stuffed their faces, the speeches begin. As tradition, Smith speaks first, and no matter how many times he tells you it’s going to be short, it never seems to be. The advice he left us with was to just go out there and run. 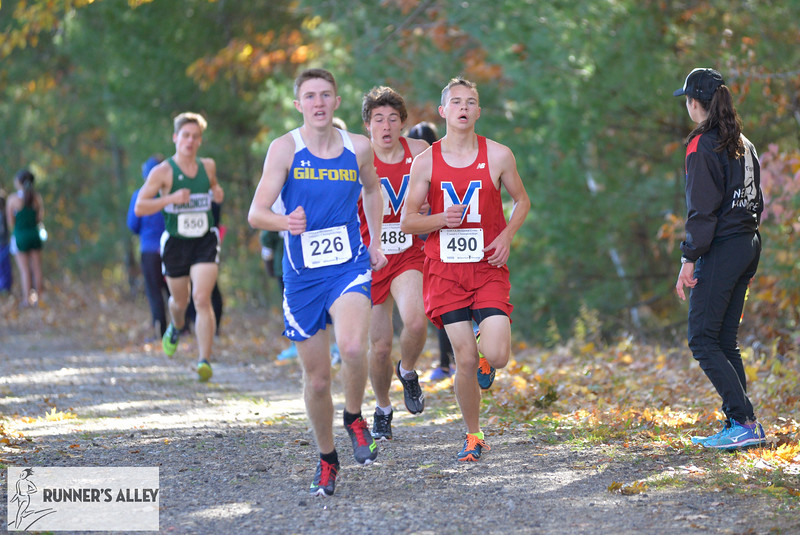 Up next, every senior is required to give some sort of a speech. It’s surprisingly easy to write one. At this time in my life I feel the need to reflect back and thank people who have impacted the past few years, and the speech gives seniors the perfect opportunity to do that. In addition, most have a few words of inspiration for underclassmen about the upcoming race. We laughed the rest of the night away as an underclassmen took the stage and gave an incredible comedy act without realizing it.

Saturday morning, the nerves weren’t as bad as I had expected. The girl’s team, down one team member certainly would have its hands full, trying to grab one of those top five spots that gets you onto MOCs.  The boy’s, with slightly loftier goals, would have its hands full trying to repeat as champions.  In likely my final race of high school cross country, I definitely laid it all out there, and it paid off in a nice PR on NH’s least PR-friendly course.

For the boy’s, up against a strong Kearsarge, the challenge was too great, and they lost the opportunity to repeat by one agonizing point. The team’s inexperience and desire was too much to overcome, and they lost to a team that was better that day.

And while some might say we fell short of

our early season goals, we were as close as you could get and not meet them. People forget that a goal is generally the best case scenario, not the average likely outcome, so to come one point and one person short of that goal, is way closer than you are generally likely to achieve.

Overall, coming into the sport as a sophomore who was a championship swimmer but couldn’t translate that success into a championship runner, I didn’t really have any expectations. In fact, I really didn’t even enjoy it that much.  But in the end I realize just how much I’ll miss it. In the end, it’s never really been about where I will end up in the sport, but more about the journey it will take me on.

And it’s been quite a journey.

Thank You Briana for giving all of us a candid, authentic insight on your and your team’s experience!  You all are a great example for NH Cross Country! We are very thankful to Mascenic Cross Country for sharing their entire season via blog entries and pics!  As a bonus, they […]