his past season, my female captain Briana Boulerice, shouldered the duty of Mascenic team blog, and according to many of you out there, it was well received. Briana is the highest achieving student at Mascenic, along with a champion swimmer, so asking to write a blog was an additional duty she did not need.  However, like all Briana’s tasks, she always comes through.  I am very thankful for her taking on the additional burden and representing Mascenic so well.  She finished up her senior campaign with a solid race at Derryfield with a season and career PR.  Which leaves the final Mascenic blog in my hands.

This past week we took some extra time to recover from the D3 championships. Running hard on the Manchester course definitely takes a bit more out of you and we wanted to make sure if we erred it was on the side of caution.  Tuesday we did a 50 minute negative split run, slightly uptempo just to make sure the legs were working and to press the cardiovascular system just a touch.

On Thursday we ventured to the MOC course to get a feel for it and learn the spots that might cause some problems and where we could run fast. Many other teams were in attendance as well, some like us getting our first lo

ok of the season on the course.  We ran some 200’s at goal pace on the track and finished up our cool down in the waning light of the day.

First up on Saturday were our two girls that made MOC’s and to say our season’s #1 was fired up would be an understatement. Having not run to her standard last weekend, finishing 8th in D3, she was primed to leave it all on the course and she did.  She came agonizingly close to a berth at New Englands finishing 28th and the first D3 girl, along with a new PR and the first time under 20 minutes. 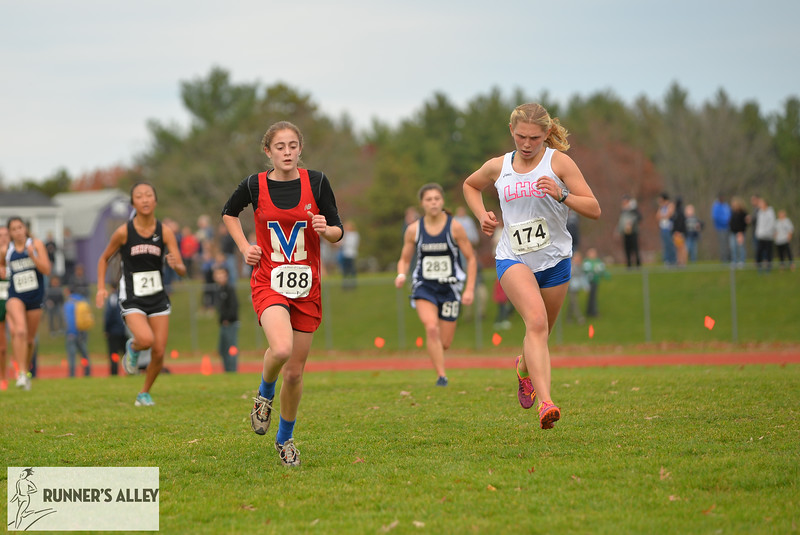 The guys didn’t fare as well. Not sure if was rookie nerves on some part, or being able to go out conservatively most of the season and make up the ground as the race goes on, but the boys got buried in the field and couldn’t dig themselves out.  Avery Traffie did manage to climb out and grab that last New England spot to move on but as a team we finished in 13th, again one point behind the top D3 team, this time Monadnock.

All in all the season was a good one. You don’t usually lose five seniors and vie for the divisional title.  You also don’t go without a full squad for more than five years and just miss out on a trip to MOCs.  We will be a very raw team next August, but with a little focus and a bunch of summer miles, we should be in the hunt come October.

We would love to see some other teams submit weekly blogs in 2016. Please look for a post asking for teams to contribute next August!

NHCC:  We would like to give a special thanks to Briana for her weekly contributions!  Because of her, we all have gained an insight as to what it is like to be a NH High School XC runner!  Thanks so much! Jackson Brannen is a sophomore at Goffstown High School. He sets very high goals at the beginning of each season and enjoys […]

As part of our preparation for this coming weekend’s NHIAA Divisional State Championships, Fergus Cullen was kind enough to share a version […]