Oyster River’s Bobcat Invitational will have a decidedly different look and feel to it this year. Due to construction of the new track at Oyster River, the meet is being held on Souhegan’s Freestyle Farm course. With no pavement and consisting of one small loop and one large loop, the course is challenging, both for runners and spectators. PR’s will be a little harder to come by!

Bobcat is traditionally the meet where many teams and individuals really push the pedal down for the first time. For that reason predictions are slightly more challenging, but early season duels have given hits as for what to expect.

In the girls race, Souhegan, the 5th-ranked team in the state and the current top D-II school is the clear-cut favorite. With potential to place 4 girls in the top 10, it really looks to be a competition for second for everyone else. 10th-ranked Monadnock will have it’s hands full fending off Oyster River and Winnacunnet. Don’t be surprised to see another team rise up to challenge for a podium spot, early season surprises are really no surprise!

ndividually, Souhegan’s Madeline Hunt just blitzed a 19:24 on Tuesday on the very same course, a great time for Freestyle Farm. With it being her home course, look for her to not go down easily. With Exeter absent, the contenders should be Merrimack Valley’s Kristie Schoffield, who has spent the past few weeks laying low after winning the Great Glen Invite, Winnacunnet’s Kelly Arsenault, who has seen some solid racing this season, and Oyster River’s Danielle Slavin, who has the motivation of defending the Invite for Othe Bobcats.  Of course, there is also the great unknown in Hopkintons-by-way-of Tilton Prep’s Maddie Clark. Maddie spent last season crushing course records in the private school leagues, this year she will be bringing her Tilton team to a few public meets, including Bobcat.

On the boys side, the big story is the 2016 debut of Patrick O’Brien 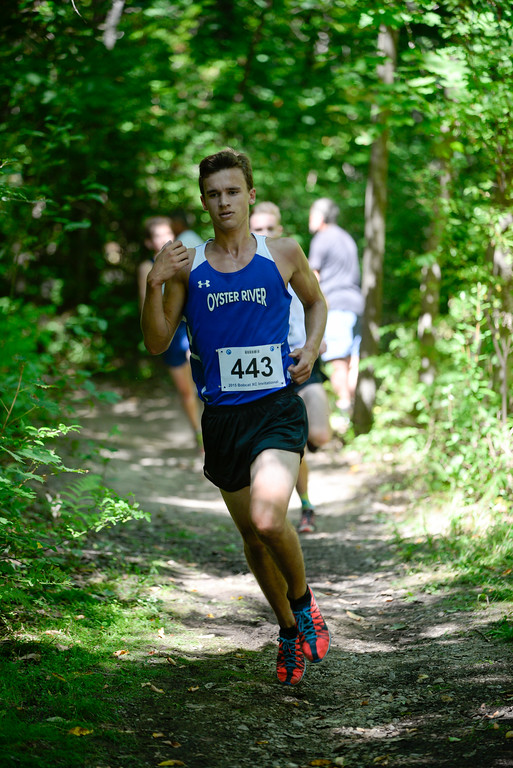 and the first hard effort by his 5th-ranked (2nd in DII) Oyster River squad. As the only ranked team in the meet, they, like the Souhegan girls, should run away with the top team spot leaving the question of who will fill out the podium? That is the biggest question of this meet. Spaulding had a decent pack time recently, Goffstown has speed up front. Predicting the next couple of places would entail a real crystal ball.

Individually, this race marks the first encounter of DII’s top two returning harriers, who also happened to be the top two overall last year at Derryfield at the Divisional meet.  O’Brien will be racing for the first time, while Goffstown’s Jackson Brannen has seen some action, but has been keeping it mellow. Will the underdog prevail? Beyond these two, Hopkinton’s Simon Doneski and Merrimack Valley’s David Reynolds have each been running well this September, and will look to compete for a top-5 finish. Back in 1987, a group of New Hampshire cross country coaches were lamenting the fact that cross country athletes never got enough […]