Having a coach lead a team for over 20 uninterrupted years creates the impression that life cannot go on in that program without the presence of that coach. This person was well-embedded in our school community, knowing all runners that have passed through the program since before any member of our current boys team was born. This coach has also made a permanent mark on the running community as a whole with his tradition of excellence. At Oyster River High School, this coach was Greg Gephart.

Greg was an extremely experienced leader and lover of all things running.

He could probably tell you the top female runner’s time from the Class I State championship in 1995, along with the temperature and stage of the moon that day without even getting out his smartphone (which he did not own by the way). He was just that kind of coach, a memory bank of athlete’s names, splits, and PR’s. Do not get me wrong however, Coach Gephart was not a cold man only concerned with race times, he forged many valuable relationships with all of his runners and spent time helping them personally develop as athletes.

He told many quirky stories about former runners of his, gave us advice, and always reminded us that “sleep is a weapon”. Greg held a place in the heart of every Oyster River cross country runner, and I am certain that in the future when I think back to where my running career began, I will think of Greg Gephart. On my first day of practice freshman year, I ran the longest I had ever attempted to at that time: four miles. Greg ran the whole thing with my friend Bengt and I, as we chatted about our aspirations as runners while huffing and puffing. He encouraged us and told us that with good training, anything was possible, and somehow I made it through my longest run ever at that point in time.

I believe I am speaking for everyone on our team when I say that when we heard that Coach Gephart was leaving, we were devastated. After practice during outdoor track last season, he pulled my friend and teammate, Patrick O’Brien, and myself aside to let us know that he would not be returning next year. He let us know why, and our first question was, “Who will be taking your place?” We deemed it impossible at the time for anyone to be able to have as much of an influence on our team as Greg did, but we were wrong.

It was said that a former Con-Val runner named Scott McGrath was in the running for taking over the position as head coach, if he wanted it. We heard all the statistics before even meeting our new coach for the first time, and we all got a very serious vibe just from hearing about his accomplishments. It was such a relief when we finally were able to meet him and discovered that he was just as kind of a guy as our old mentor. Coach McGrath is an extremely easy person to talk to about anything. Injuries, personal training, and he even knows statistics just like Greg did!

Having a coach that not only ran in high school, but also ran in New Hampshire, is extremely valuable. He is able to relate to us in a way that our old coach could not because he simply did not have the experience of being a high school runner in his time. It is also very helpful to have a coach that is still faster than some of his varsity runners!

Our team, myself included, did not think that the transition was going

to be as easy as it actually was, and that is a testament to the leadership abilities of Coach McGrath. While running one of our favorite loops in college woods, “skinny trail” we call it, I let my teammate Parker Spinney know that I was writing this article to talk about the coaching transition. In his words, he said it was very easy due to the fact that our coach is “a chill guy.” The word “chill” could be used to describe many things about Coach McGrath, his demeanor, sense of humor, and ability to tolerate our shenanigans during practice. Most things about him actually, with the exception of his training methods.

All runners on the team have experienced an increase in weekly mileage, creating stronger and faster athletes as a result. We endure grueling repeats, excruciating long runs, but also get to enjoy our recovery days. He stresses good nutrition, sleep, and stretching just as much as a difficult workout.

All things accounted for, the transition between coaches has gone very well so far. Coach McGrath treats us with the same respect as we treat him, and I can tell that we all appreciate it greatly as a team. As a senior, I will only be able to spend one year training under him, but I am confident in saying that Scott McGrath will eventually hold the same legacy in the Oyster River running community that Greg Gephart holds today. 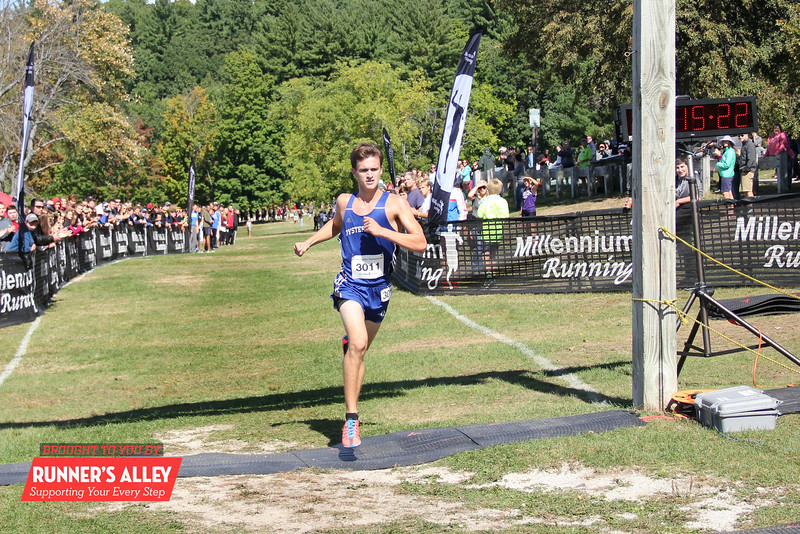 Upon finding out Greg was moving, there was a moment a shock and concern. I was made aware of Scott as a strong candidate, but spent a week or two worrying about the potential of having a coach I didn’t like. This feeling was lifted when we found about Coach McGrath would officially be the coach. After a few phone conversations and meeting Scott at summer runs, I was certain he would be a good fit for me personally as a runner and there wouldn’t be any break in Oyster River’s tradition of excellence.

We lost a great coach and person in Greg, but I am very confident in Scott to build on his legacy. Obviously there are changes in the way Scott operates. Workouts are different, we do more core, there is more focus on cool-downs, etc. Right now there are a few guys who have been hurt, but the training we are doing is really paying off for the healthy ones. We saw four of our varsity team PR at Manchester, one guy come within 10 seconds, and the other two are returning from injury. I am looking forward to the rest of the year. Catherine Bryson Hanover XC 2003 “It’s not the size of dog in the fight, it’s the size of the fight in the […] Volume 4 Week 6 Middle School Meet! Beaver! Manchester! Week 6 was hectic beginning on Monday with the group getting out for […]