With sporadic rainfall, cool temperatures, and a light breeze,

the conditions for the 40th running of the Capital Area Cross Country Championships were perfect. 16 teams representing all three divisions and two private school leagues gathered to decide who were the top teams and individuals in the Capital region.

The race started off with a combined JV race for the first time in several years, allowing for greater participation and providing the varsity races with a true championship feel. The combined team from Concord placed first, followed by Kearsarge and then Bow. Individually as is often the case, the JV races predicted the stronger varsity teams, with Colin Conery of Concord winning in a time of 17:40, followed closely by his teammate David Cook in 17:42. Kearsarge had the next two finishers, with Grant Croft in 18:20 and Trevor Pauling in 18:23. To round out the top five, it was back to Concord with Joseph O’Brien, who crossed the line in 18:40. For the girls, Concord again had the top finisher, Sarah Zarakotas who finished in 21:45. Concord also had the rest of the top five, with Lauren Soper (22:24), Maggie Whitcomb (22:34), Kat Jepson ((22:34), and Heather Deacon (22:38).

In traditional Cap. Area reverse-gender order, the boys were the first varsity race to toe the line. Despite placing second by one point two years in a row to St. Paul’s, Concord was the big favorite due to their number one ranking in NHXC. It was evident from early on in the race that not only was Concord going to win, they were going to win big. James Wilkes and Forest MacKenzie ran side-by-side through the mile, trailed by David Reynolds of Merrimack Valley, with four more Concord runners just behind him. By the second mile Oliver Spencer had about bridged the gap to his front-running teammates and it was 1-2-3-5-6-7 Concord, with Reynolds gamely holding down a top-5 spot. Simon Doneski of Hopkinton, Mason Benedict of Kearsarge, and Ian Daly of Inter-Lakes packed up not far behind.

Rounding the soccer field for the final kick home, Wilkes and MacKenzie were clear of pursuers and would go on to take the top two positions, 16:35 for Wilkes and 16:36 for MacKenzie, while Spencer rolled in 7 seconds back in third in 16:43. Eli Boesch-Dining and Ryan Devine passed Reynolds to set up a Concord sweep of the top five, only to be denied by Reynolds down the stretch. Devine grabbed 4th in 16:57, Reynolds 5th in 16:58, and Boesch-Dining 6th in 17:01. Interesting note, the first four finishers for Concord are all different grades, with Wilkes the only senior in the top seven. Matthew O’Brien placed 7th in 17:09 to give Concord 6 in the top 7, while Doneski ran to 8th in 17:11, Daly finished 9th, also in 17:11, and Benedict was the final medal winner, finishing 10th in 17:12.

When all was said and done, Concord had won with 16 points,  the lowest point total since the third running of the meet in 1979, when the Crimson Tide scored the only perfect score in the history of boys Capital Area. Of course, there were only 4 teams competing back then, which makes this feat even more impressive. Kearsarge backed up its top 10 NH ranking with a solid runner-up score of 78, while St. Paul’s stayed on the podium for the 7th straight year with 112 points. Prospect Mountain turned out to be the best of the rest, finishing 4th with 171, while Belmont finished just behind with 189 points.

As dusk threatened, the girls took their turn at the start line. 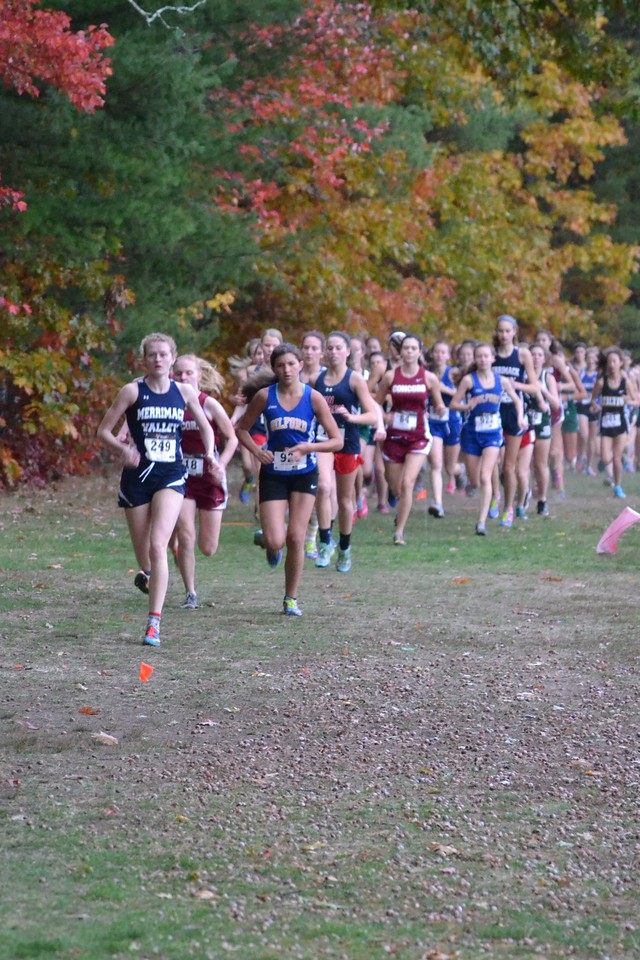 Kristie Schoffield of Merrimack Valley took it out from the gun, cruising through the mile with about a two-second lead before turning it up a notch to bring it home in a new course record of 19:25, winning by 27 seconds. While the race up-front was rather static, the race for the next several spots was anything but. Cassie Shea, in a return to form, ran alongside her teammate Jennika Mannesto of Concord for the first mile and a half. Behind them was an ever-changing chain of girls, with Gabrielle Czerula of Concord, Alice Riley of Belmont, and Madison Clark of the Tilton School. As the race developed, Riley and Clark teamed up to pass first Czerula, then Shea to move into the top 4. Mannesto, running alone for the second half of the race finished as the ony other girl to break 20 minutes, running a 19:52. Behind her, the Riley/Clark battle continued right to the line, with each girl bumping elbows for the last 200 meters. In the end, Clark earned 3rd place, matching her 2014 finish, with the same time as Riley in 4th, 20:05. Shea hung on to finish 5th in 20:28, with her teammate Czerula a little behind her in 20:48. Lauren Rouse of MV went from 7th to 12th and back to 7th again, finishing in 21:02, while Molly Bragg (Concord, 21:03), Sydney Stockwell (Hopkinton, 21:16), and Maya Weil-Cooley (Inter-Lakes, 21:18) rounded out the top 10. With the weather wreaking havoc on our Duel Meet Tuesday posts, thought we would make this post a weekly, ongoing post. Exeter […] By Dave Irving PICS! Full Results Courtesy of Lancer Timing Thetford, Vermont is a lively place to be on the first Saturday […]