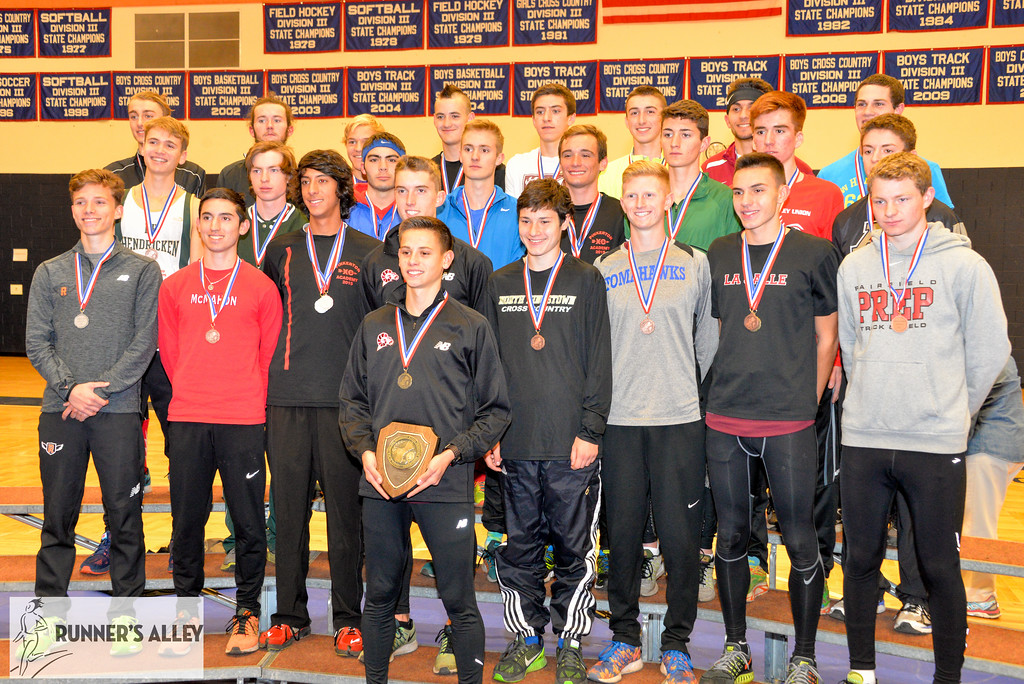 12th at Ponaganset High School in North Scituate, Rhode Island.  The Boys’ Race is at 11:30 and the Girls’ Race is at 12:30. If you are unaware, the races feature the top 6 teams and top 25 individuals from the 5 participating New England states (Massachusetts does not participate).

This year’s edition in particular features 1 of the fastest harriers in the country.  US #5, David Principe of LaSalle Academy, Rhode Island will be defending his 2015 title on his home state’s course.  Can Oyster River’s Patrick O’Brien (also on the National watch list) give Principe a bit of competition?  On the girls side can Exeter’s Jackie Gaughan win her first New England title after finishing 13th last year.  Can Souhegan girls challenge for the title against LaSalle of Rhode Island and Champlain Valley, Vt?  Which school will be NH’s top boys’ team? 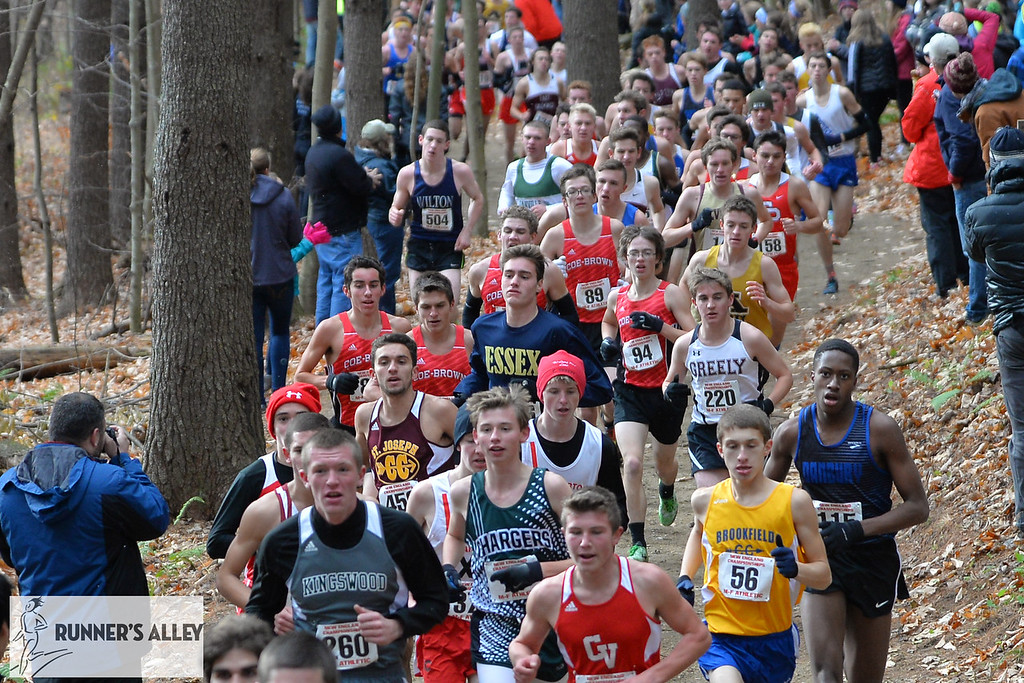 The boy’s race gets underway first at 11:30 am on the challenging 5k course of Ponaganset HS!

La Salle Academy of Rhode Island is the overall team favorite and will be looking for their fourth straight New England title.  It won’t be a cake walk this year for La Salle.  They are a lot younger than in years past, but they do have the RI home course advantage.  The rest of the states in contention have a lot of parody with one or two teams each that could challenge.   New Hampshire, however looks to be the deepest state this year with six quality teams competing.

La Salle is led by last year’s New England Individual Champion and current Rhode Island State Champion David Principe Jr.  Principe won this race at Thetford, Vermont last year by an incredible 21 seconds.  At the RI State meet last week, he ran 14:56 to win by an astonishing 57 seconds over Mars Bishop of Barrington.   Principe’s teammate freshman Max Dimuccio finished 3rd for an impressive 15:57.  The very talented sophomore Sam Toolin of North Kingstown RI is the #2 NE returnee from last year.  Bishop Hendricken (RI) is the second best team from Rhode Island and should be vying for a top 5 team finish.

Staples is the top team from Connecticut and will be led by 2016 CT State Champion Zakeer Ahmad who won a close one second victory over Drew Thompson of Fairfield Prep. The always tough team from Danbury should be challenging for a high team finish as well.

Falmouth of Maine won the Class A Championship last week and should figure in as one of those teams vying for a top 5 finish.  Maine’s top runners are Class A Champion Tucker Barber of Mt. Blue High School and Class B Champion Luke Laverdiere of Yarmouth.  Other top runners from Maine include Freeport’s Henry Jacques, Mt. Ararat’s Cameron Meier and John Hassett of George Stevens. 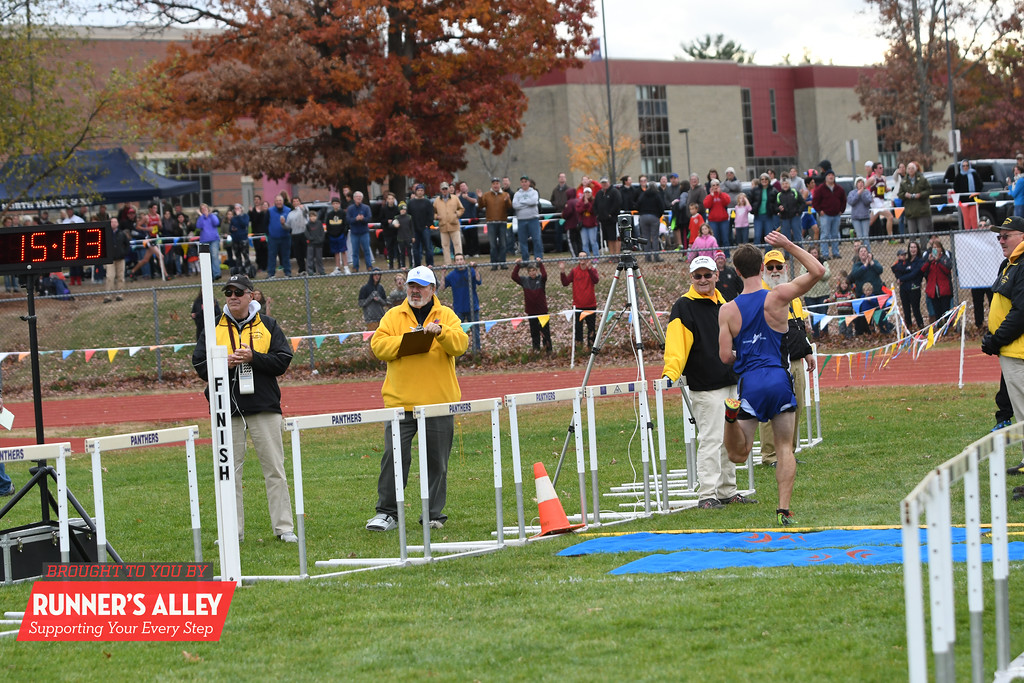 Vermont State Champion Tyler Marshall of Champlain Valley hopes to lead his team to the podium this year.  Winners of the 2016 Thetford Invitational, Champlain Valley put a great big exclamation point on their season by winning the Vermont State Championship on the same course. Both Marshall and CVU are by far and away tops in Vermont and hope to showcase their talents on the New England stage.  South Burlington, Burlington and Essex could crack the top ten.

New Hampshire MOC Champion Patrick O’Brien of Oyster River could make a mighty statement for himself if he could take the win out Prinicipe’s clutch.  After cruising to a new course record of15:03 at Nashua last week, it’s in the realm of possibilities that O’Brien could give a serious challenge for the coveted title. This race clearly looks as if it could be an epic two-man battle between the talented seniors.

Last year the star studded Pinkerton team finished second overall in New England.  NH looks to have several teams that could potentially leave their mark on Rhode Island and leave the Ocean State with satisfying smiles on their faces.

Nashua North is going to need to run well away from home and on the hills, perhaps needing another herculean effort from Connor Muise and David Vorbach to challenge.  Max Ireland and Simon McIntosh need to keep close with North’s two-headed monster. 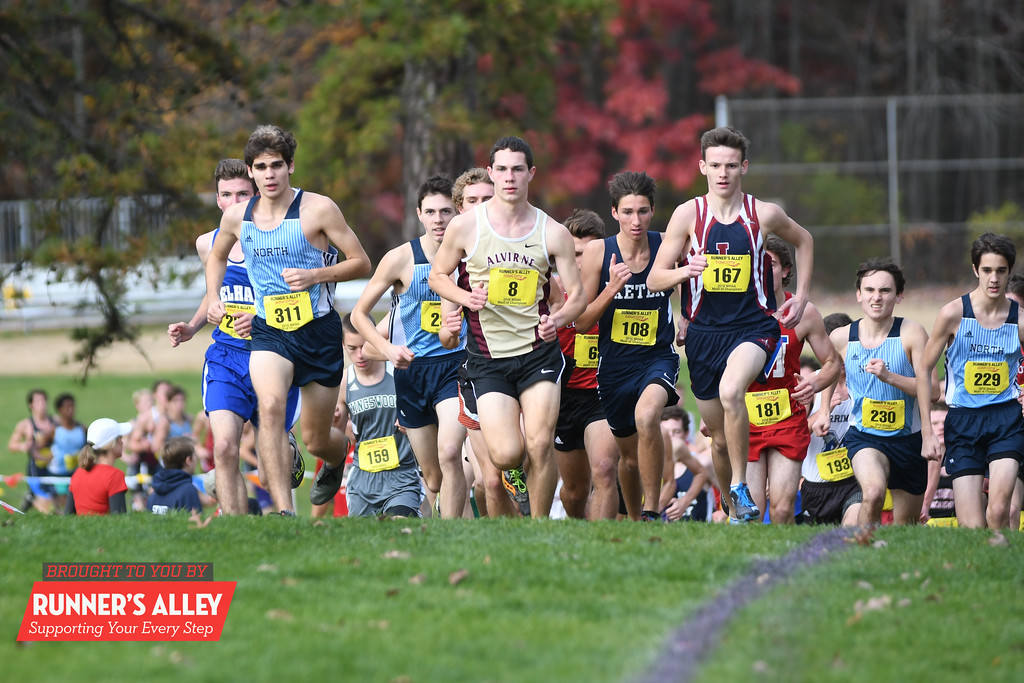 Concord is steady and looks to be the most consistent and capable team in New Hampshire to challenge for a top spot. Forest MacKenzie, Jamie Wilkes, Oliver Spencer and Eli Boesch-Dining will be in the mix. It’s a matter of how close freshman #5 Ryan Devine will be in this talent-rich environment.

Pinkerton will need to get back on track after last week’s 4th place MOC finish if they want to duplicate their 2015 accomplishment.  Pinkerton senior leadership of Calvin Graves, Jonathon L’Abbe, Pat Bastek, and Kyle Hajj need to get back to Division 1 Championship form.

The wild card is Keene, they always seems to do well on the hilly courses, and they have enough talent, if they have enough left in the tank. Jonathon Allard, Andrew Derry and Jake Velazquez are tough as nails.  The question is how bad the rest of the team wants it.

Coe-Brown is a veteran team that didn’t run up to their own expectations last week. Seniors Zach Richards, Davio DeLuca, Tanner Richards, and River Groves need to make the most of it, before passing the reigns over to junior Evan Tanquay.

Oyster River has O’Brien and Henry Keegan.  There have lots of youth on that team, which looks to be a top team of the future.  Maybe the future is now.

Pelham’s Cameron Starr ought to have plenty of company.  There will be many talented runners of his caliber and he will have to run his best to crack the top 10.  Hopeful to shine in their last interscholastic cross country race are seniors: Londonderry’s Chris Zaino, Goffstown Jackson Brannen,  Alvirne’s Noah Bellomo, Merrimack’s David Vaccaro, Mascenic Jake Movessian and Monadnock’s James Elmour.  While Hokinton’s Simon Doneski, Campbell’s Jeffrey Allen and Hanover’s Morgan Baughman are eager to keep climbing the ladder of success.

The quick question here is, can anyone beat US #30 Exeter’s Jackie Gaughan?  It seems as if the 2015 cross country season was quite motivating to the Exeter junior.  After finishing 13th, Gaughan simply built over the next several months to complete her track season with a 16:53 5k at track nationals.  Quite simply, she has not looked back.  Not only has she reigned supreme in NH, but she is poised to do the same at New Englands.

It is quite possible Gaughan has faced her stiffest competition in freshman Caroline Fischer (Bishop Guertin).  Rhode Island champ Eleanor Lawler ran 18:45 at Derryfield earlier this season, while Fischer posted a time of 17:59 at Divisionals.  However, what is great about New Englands is the utter showdown between state champions.  Look for Lawler to race very well in her home state, as well as Maine State Class B Champion Abigail Hamilton (Yarmouth), Vermont State Champion Rena Schwartz (Green Mtn Valley), and Connecticut State Open Champ Morgan McCormick of Wilton.  But, with Bedford’s Leya Salis, Fischer and Gaughan, not to leave out Susie Poore of Windham, look for the Granite State to be well represented up front. Teamwise, yes 2-time defending champion LaSalle remains strong and this year’s 82nd rendition is on their home turf.  However, look to our neighbors for the favorite this year in Northeast #4 Champlain Valley, Vt as the favorite to take home their 3rd New England title. Led by the ultra-experienced Sophie Gorman, they have won several invitationals, including Manchester this year, and have a knack for running well towards the end of seasons.  Eerily, when New Englands were last at Ponaganset, it was Champlain Valley defeating the hometown favorite LaSalle.

Along with these two perennial powerhouses, Souhegan seems to be poised to crash the party.  The Lady Sabers have looked tremendous the last couple weekends in the process of establishing themselves as the premiere team of the Granite State.  It does remain a challenge to put it altogether for the 3rd consecutive week, but all indicators point towards them doing just that, but could very much benefit from Madeline Hunt have a big day.  Pinkerton and Coe-Brown continue to run consistently at the end of the year, so do not count them out.  If these two teams can join Souhegan with strong performances, it is quite possible the 603 could see three in the top 5!