Over my fifty years on the planet, I’ve heard the phrase “I’m proud of you” countless times.  Upon graduation, landing a good job, getting a strong grade on an assignment, for winning a race, for so many things.  I’m not complaining about the use of the word, but I think we often use it any time we see “someone or someones” do something that is pretty good.  In fact I think it’s important to let people know they’ve done something good.  But if we really think about what the word really means, using “I’m proud of you” every time someone does something that is expected, we reduce the value that real pride means.

This past weekend, my boys team won the D3 State Championship and the girls finished in fourth, both moving on to the Meet of Champions.  I am proud of those kids for sure, but not simply because they ran well enough to win or do what they needed to move on, but because they refused to let go when it would have been easy to do so.

Let’s start with the boys.  Mascenic has been ranked in the top ten of the NHCC rankings for most of the season.  This ranking is based on their performances in races but “winning” alone does not do that.  It would be easy to play in the D3 ranks, taking on the other teams in D3 and pile up a solid record.  So in order to be in the top ten, you need to “play” outside division and take on bigger teams that race across divisions as well.  We did that, and won, but that’s not what makes me proud of these kids, mostly because we have the talent to run with the best regardless of division.

And it’s not because they ran well without the team’s #1 runner.  We held him out with a hip strain knowing we had what it takes to get to MOCs without him and chase our bigger goal of challenging for a New England berth.  We felt we had a shot to win D3s without him, but knew it would be tough either way.  The hope is he is back in the lineup, we’re ready to roll and we’ll give the top six a crack.

What makes me proud is that these boys knew they had to step up their game against Kearsarge, who are well coached and

experienced, and would have to “earn” the title if they were going to get one.  We felt pretty confident with our #1 in the lineup, but knew we’d need at least five good races.  Knowing that “burden of proof” exists often means a prepared team will rise to the occasion and a team that questions their ability crumbles.  And that’s exactly what happened in 2015 when we ran up against Kearsarge for the title, losing by one point.  Many of the same athletes made up this year’s roster and would have to answer those same questions.

So I am proud that faced with similar challenges, and many of the same questions, and the same team for the championship title. The Mascenic boys made the right choice, to go after it, to go big, and not sit back and hope.  They knew it would take everyone’s best effort and gave it their all.  And it paid off.  The bus ride home was one of satisfaction more than celebration, knowing they had achieved what they set out to do even under trying circumstances.

And on the girls side.  We had prepped during race week that they had an opportunity to make it to MOCs but it was not a foregone conclusion.  Campbell would be at the top with Hopkinton chasing.  White Mountains often comes out of nowhere and Monadnock had a shot as well.  It seems we were in a pool of about three other teams for that fifth spot, but we would have to do more than just simply run well, we’d have to really work to do so.  While we have only one freshman on the team, and the girls had made great progress during the season, we hadn’t gelled fully going into Saturday’s race and had no idea how things would shake out.

In the end we had two great races, one solid race, and two races that the runners would like to take back.  Our top girl was off her game for sure and our third had a really rough one, but they were all willing to struggle, and doing so, put themselves in the best position to reap the benefits when others falter.  The girls came in fourth, just one point in front of Monadnock, and 11 points in front of Bow.  If any of them had given up, decided it wasn’t their day, those 11 points could have evaporated away pretty easily.

So as we rode back to New Ipswich, the kids enjoying what their hard work and effort had produced, I was able to reflect on the events of the day, and the season, and left to my own thoughts. I realized that what I was feeling towards my athletes was one of real pride.  The kind that isn’t earned just because they tried, or event that they succeeded, but that they had the desire to really suffer and do it for their teammates.  As a coach, my job is to ask them to owe it to themselves, do the best they can.  What I saw this past Saturday was them going all in for each other and the sense of contentment when they did exactly what they intended to.

Congratulations to all the teams that competed in the Divisional championships and good luck to all those competing at Meet of Champions.

It’s finally here – the week leading up to the State Championships. I’m sure this is the most nerve-wracking five days of the season for

those who will be racing on Saturday – however, I am personally ecstatic! This Saturday will be my last high school state meet ever, and I couldn’t be more excited! I’ve learned the hard way that nerves are no good for a runner, so instead let’s all get pumped for Saturday!

The Vikings kicked off the week with our annual Monday-before-States River Road mile! The goal is to run it fast, but in control. Smith likes to use this exercise to show the team just how fit they’ve become over the season – it is very common for people to achieve new PRs in the mile at this point in the year, and the common results were unchanged this time around, with one of our girls running 40 seconds faster than her previous time! After everyone had caught their breath, we headed out for either one or two 800 sections at pace, just to secure the quickness in our legs before cooling down up Mascenic Hill.

Wednesday held our last 300 meter repeats of the year, and due to the fact that the maintenance crew began working on our track with a rototiller, we had to move the workout onto the course. We didn’t have the clearest weather over the last few days, so a good portion of the effort in the workout went towards avoiding patches of mud and trying not to slip and fall three days before the state meet.  Despite the wet footing, everyone handled the workout well. For cool down, we were able to help out in the Valhalla Development Meet, consisting of a number of local aspiring young runners. Connor Traffie of Boynton solely pushed the pace at the front and set a new record for the 3K course in 10 minutes flat. The majority of our high school team, however, escorted 7-year-old Parker Cormier throughout the entire course, where he never stopped once! Very impressive! Congratulations to all who participated in the meet!

The Mascenic clan met up at Smith’s house later that night for the annual Wednesday-before-States pasta dinner. We chowed on

carbs and guffawed at Cole’s attempt to bring denim-on-denim back in style (we’ll see Cole, we’ll see) before settling down in the basement to crowd around Smith for his traditional first speech. In a nutshell, Smith’s advice for this year was to not focus our efforts on beating any particular person or team necessarily, but to just toe that line at Derryfield, run our hearts out, and that will put us in the best position to accomplish our goals. A round of applause led us back upstairs to dig into some of the very best dessert dishes we’ve ever had in the form of Shelby’s mom’s signature cupcakes and Dakota’s mom’s ice-cream-Oreo-chocolate-Reese’s dessert (we’re still not sure what it we actually ate, but whatever it was, it was delicious). After a few minutes of recovering from the sugar overload, we headed back downstairs for the senior speeches (and one junior speech from early-graduate Michael Fappiano-Putre). The senior speeches are sacred to the team, and the parting words and thanks that those of us who are leaving gave to Smith and the team will hopefully remain in their hearts for a long time. The night ended with the viewing of footage from the 2006 cross-country state championships, where both the Mascenic boys’ and girls’ teams won the Class M&S titles – in a monsoon, I might add, so I have always found it to be very 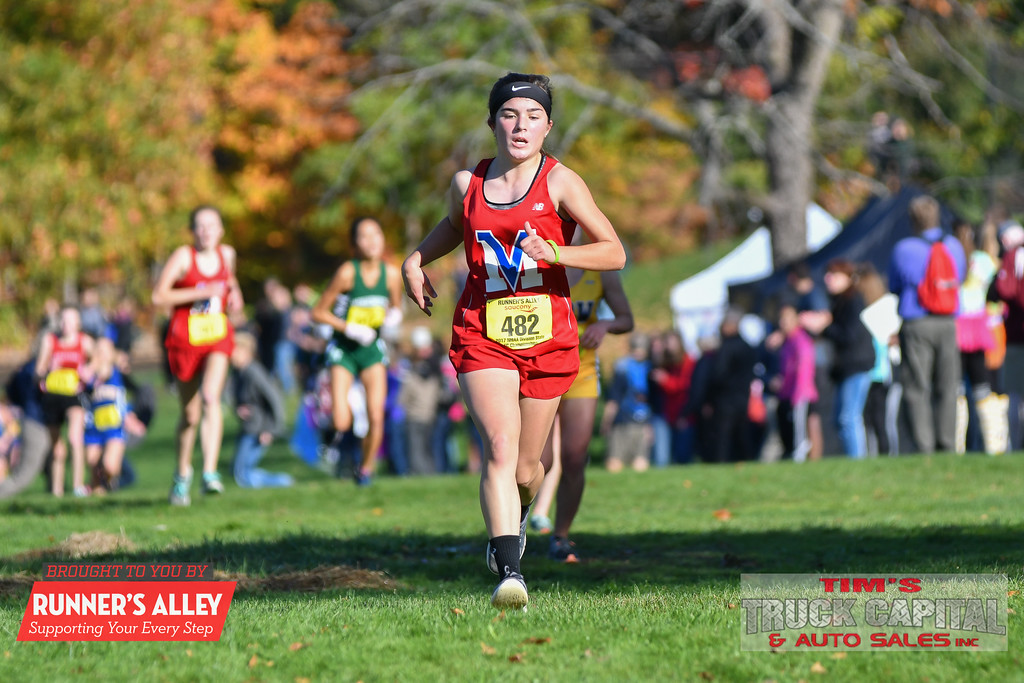 I figured I might as well end the blog on Wednesday, since Thursday and Friday will be short, easy prep work preceding States. It has been an honor to write this blog over the last 11 weeks – it really opened up my eyes to how special this team is to me and how I’ll look back and cherish the experiences I’ve had over the years with my teammates and Smith. I hope everyone who has read this has enjoyed getting a glance into the lives of the Mascenic runner.  For those who are racing on Saturday, I wish everyone the best of luck and I hope we all will be able to cross through that famous Derryfield Park arch with satisfaction! Let’s run!

No, thank you Sam for allowing us a small glimpse inside Mascenic Cross Country!  Your well described stories have been impressive, insightful and provided entertainment and teachable moments!!!  thanks so much! – NHCC Streakers! Longest Active Streaks Qualifying for Meet of Champs It’s great if you were on a team competing to win a division […]