On Saturday, for the 41st occasion, New Hampshire Cross Country will gather and compete to determine who is the best of the best for 2017.  Whether teams and individuals use this as an opportunity to simply qualify for New Englands (top 6 teams/top 25 individuals) or as their final competition of the season, it is the one time when the best teams across all divisions toe the line, head to head in one race.  The individual NH State Champion is crowned, and although no team championship plaques are awarded, bragging rights for the Granite State’s top team are earned.  Good luck to everyone!

With last weekend’s relatively close competitions in both Division 1 and Division 2 coupled with the fact that there truly is no super-team in 2017, this year’s MOCs girls race has five legit contenders.  Using the Divisional Merge as our guide, based on the times specifically from the Division meets, Pinkerton Academy (NH#1) seems to have the best top 5 in the state making them the favorites.  All five will have to run very strong to hold off the front runners of Bishop Guertin and the depth of Souhegan.  However, the Trail Blazers always seem to run well come MOC time and seem to be truly on the upswing.  Led by sophomore Meghan Cross, the Pinkerton has three veterans in Jordan Vaillancourt, Maison D’Amelio and Ciara April who have been through all the wars over the past few years and are battle tested.  Add to this mix track stud Britney Johnson, who can only continue to improve, and Pinkerton becomes the pick to not only win MOCs but to also continue to improve and place high at New Englands as well as Nike Cross Regionals.

The Division 1 Runner-Up Bishop Guertin (NH#2) may have the most course knowledge of any top team and their fabulous freshmen trio from last year are now their sensational sophomores, Caroline Fischer, Haley Schmitt, and Caroline Towle.  Fischer has been hurt most of the season, but managed a yeoman’s 2nd place finish at Div 1’s.  She can only get better as her fitness improves, and as C. Towle and Schmitt has shown great consistency, along with freshman Kate Messer, if the Cardinal’s 5th scorer can finish just a bit closer, they could deny the MOC title Pinkerton has coveted the last couple years.  After all, this is essentially their home course.

Although the merge has them third, do not count out defending champion Souhegan (NH#3). Last year, MOCs was merely a stepping stone for the Lady Sabers on their way to a runner-up finish at New Englands and a trip to Oregon for Nationals.  Led this year by vastly improved Jane Leighton who battled to the end to claim the runner-up position at D2’s, the Lady Sabers are deep.  Arielle Zlotnick and Marisa Romano have been their consistent 2-3 combo, but senior Elise Lambert saved her best for last as she was their fourth and decisive scorer along with Mackenzie Hayden last weekend.  With their sixth and seventh scorers not too far behind, even if one of their top five have an off day, they should easily qualify.  Right now they are certainly in the thick of it.  Don’t be surprised if they take the whole thing. 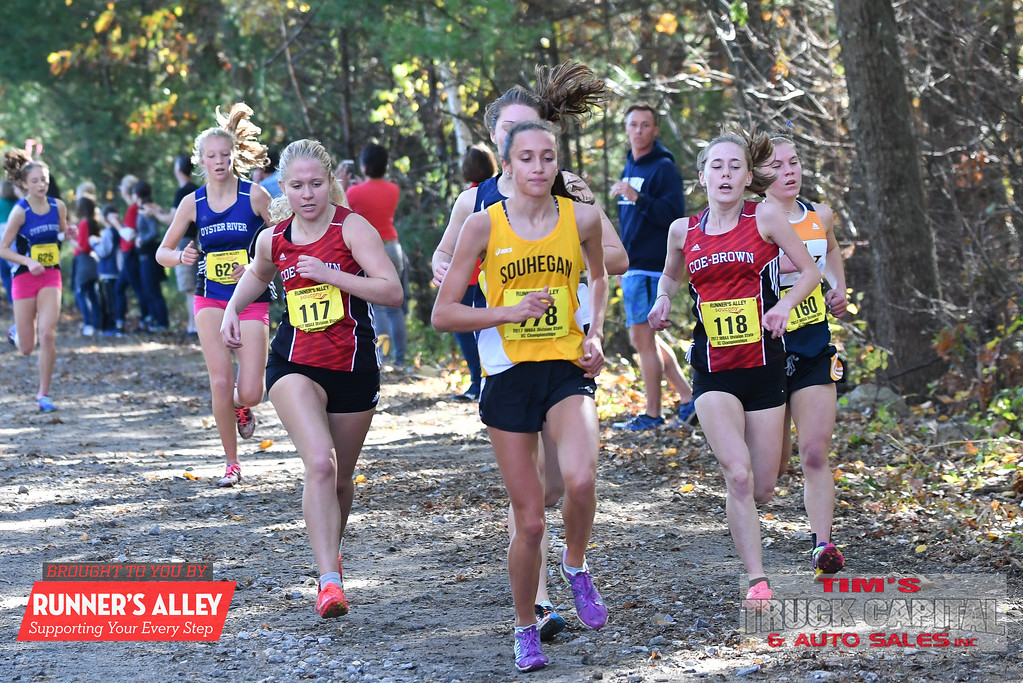 #5).  While Addison Cox and Danielle Slavin are essentially a ‘push’  in the team score, Coe-Brown seemingly has the edge when looking at a meet like the Meet of Champions, as their two and three in Abigail O’Connor and Eleanor McDonough could finish in the top 20.  Add an ever-improving Ella Malone and senior Sarah Dupuis and the possibility of finishing closer to their #3, the Bears could surprise.  As evidenced by last week when Oyster River was able to place five in front of Coe-Brown’s fourth, if Lily Doody, Sophie Sullivan, Kadence Murphy and Olivia Lenk could finish closer to the twenties, the Bobcats are certainly in business as well.

The surprise of the season certainly has to be Division 1’s Nashua South (NH#6).  After not returning their first and third runners from last year’s squad, South certainly took almost the entire season to emerge.  But emerge they did.  With the rise of freshman phenom Cali Coffin along with Lydia Mathson, and Maya Krishnan plus the rest of the team are buying into the process, South arguably has the most momentum going into this weekend’s meet on their home course.

Also contending for a top 6 New England berths will be Merrimack, Con-Val, Central and Exeter.  Merrimack (NH#7) has the pack, but can it be far enough to the front of the field to do some real damage?  Con-Val (NH#8) has been another surprise of 2017 with Veverka and Rachel Hurley leading the way.  Central (NH#9) saved their best race for last week.  Can the Pepin sisters lead them all the way to a New England’s berth? And finally, Exeter (NH#10) still clinging to being a contender despite losing two of their top runners to injury.

This is Jackie Gaughan’s race right?  She is the one with the number 1 time in the nation on her resume from this season.  She is the defending champion not only of NH but New England, who also placed 11th at Footlocker.  She is the easy pick, and yes holds the title of favorite as well as the course record.  All we are saying is don’t count out West’s Julia Robitaille, who looked like she was on a tempo run last week dropping a 17:52 at Derryfield to Gaughan’s 17:41.

While these two battle for state supremacy a pack of five should develop as the chasers.  Most intriguing will be BG’s Caroline Fischer.  She is returning from injury just in time and theoretically should gain fitness every week.  Souhegan’s Jane Leighton has the experience and poise to continue her breakthrough season while the other senior Oyster River’s Danielle Slavin is in a similar position.  Then you have fab freshmen South’s Calli Coffin and Coe-Brown’s Addison Cox.  Don’t be surprised to see Milford’s Rebecca Durham, sick last week, start with this group and try to bridge the gap if feeling good. 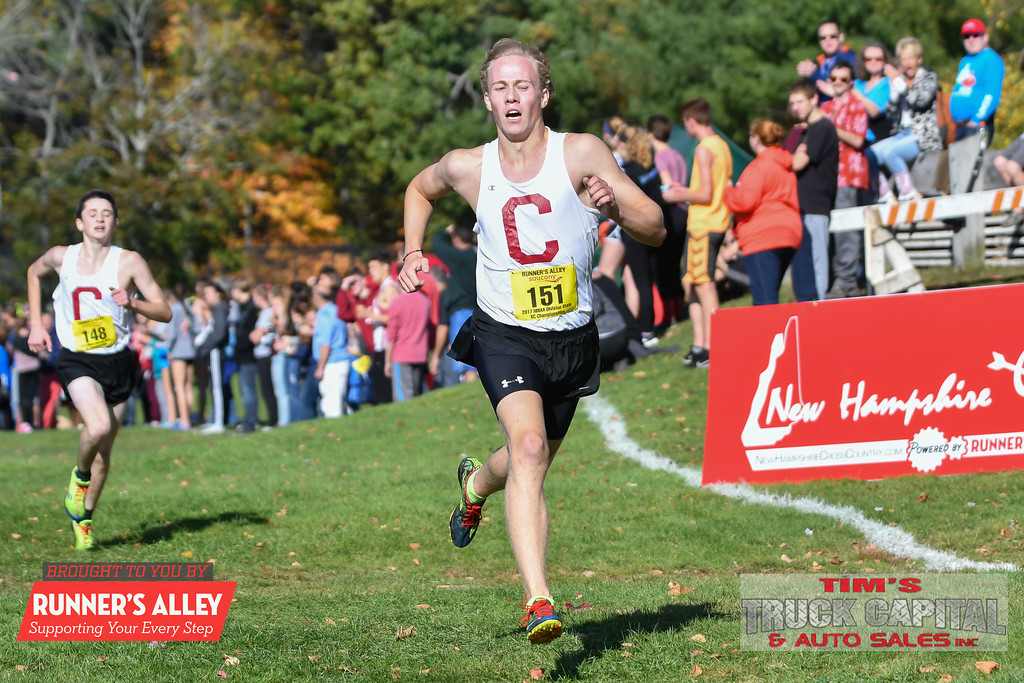 Last week, Concord accomplished something that city had not seen in over thirty years.  This weekend could be another accomplishment over a quarter of a century in the making.  NH’s #1 ranked team for the entire season looks like the easy favorite to win the team title at this Saturday’s MOCs.  The numbers support it.  Not only did they win the D1 title with an historic low of 28 points, but their average time was 16:34.  The next team’s average was 16:57.  They have the front runners in Forest MacKenzie, Eli Boesch Dining and now Oliver Spencer (3rd last week).  They have a consistent pack time of 50 seconds or so.  They have the depth with Nat Nichols, Matt O’Brien, David Cook and Ryan Devine.  They also have the right balance of experience necessary to compete on any level.  And, they believe in one another as well as in their coach and process.  The Crimson Tide is the total package.

The real competition is for second with at least four teams involved.  According to the Divisional Merge, D2 Champion Oyster River should have the edge here.  They too have a great mixture of front runners, depth, and experience.  When both Kieran Murphy and Henry Keegan are on, they have one of the best 1-2 punches in the state.  Mix in the fact that senior Parker Spinney just turned in his best race of 2017, they have the potential to do some damage.  Sophomore Myles Carrico has been a mode of consistency all season, while their fab frosh Andy O’Brien and Owen Fleischer can be the difference makers.  If Oyster River is on, they will be the next best team in NH going away.

Coe-Brown (NH #4) showed what can happen if a team runs like they have nothing to lose as they came within ten points of D2 Champ Oyster River.  Led by D2 Champ Evan Tanguay, they are assured that all important single-digit number necessary to compete on an MOC level.  Coupled with the quick varsity transition of freshmen Luke Tkaczyk and Wyatt Mackey along with sophomore Dawson Dubois and junior Gavyn Lewis, the Bears are racing at their best at the right time.

freshmen phenoms.  Led by 2017’s top NH freshman Will Heenan,the Lancers sported a 4-second pack time between their 2nd-5th runners Nathan Seeley, Jeff Cieslikowski, Ryan Young and Matt Griffin.  Londonderry and CBNA have been separated by only a handful of points any time they have raced or been compared on merges.  Expect more of the same on Saturday.  Then add in “seniorless” Pinkerton (NH#5), which beat the Lancers by 2 points and we have a three team race for 3rd with eyes on second.  Led by Joseph Gagnon, Pinkerton also relies on strong pack running as Nathan Steiger, Jeff Mize and Nolan Preble finished within 1 second of each other!

The dark horse has to be Keene.  Losing two of their top 2 at D1s for various reasons dropped them from the rankings this week, but if Jake Velasquez and Andrew Derry come back and race at full strength, don’t be surprised if they make their presence felt.  D3 Champ Mascenic (NH#8) is in a similar boat as they rested their #1 and still won.  Add in Dakota Somero and they become an instant New Englands contender. Don’t sleep on newly ranked Kingswood (NH#9) or Winnacunnet (NH#10).

One shouldn’t laugh at Concord’s goal of going 1-2-3 again this week.  Forest Mackenzie has been one of the top three Granite Staters the entire seasons and with his shadow Eli Boesch Dining  staying with him until the final kick last week, he has to be considered a contender.  Teammate Oliver Spencer has always had the pedigree and experience, but hanging back the first mile seemed to work well for him in the end.  The second week in a row of doing this could prove even more fruitful.  One can’t count out North’s David Vorbach as he is a 9:14 2-miler after all, and he has shown he can bounce back.

Both D2 Champ Evan Tanguay and D3 Champ Jeffrey Allen had relatively easy rides to their respective titles last week and will factor in the mix.  Both looked incredibly easy when finishing their races this past Saturday.   In the end MacKenzie did have the fastest time last week.  He should be given the slight favorite mantle while his Deerfield resident, Tanguay, among others, should be nipping at his heels. Interactive Results and Finish Line Video at bottom By Mike Smith Once again, both the weather and the racing was hot at […]

Results Link to Coolrunning The Milford Invitational offered up good competition for some insight into the 2016 NH Middle School season. 15 […]

One thought on “2017 Meet of Champions Preview!”