Visit our MI44 Meet Hub as our center for everything Manchester Invitational over the past several years!!!  We have race videos, interviews, articles, photos!  It will also be THE place for this year’s NHCC.com’s coverage!!!  This year is certainly unique as the 603 hosts New Englands come November!  The weather looks cooperative for fast times and great competition! 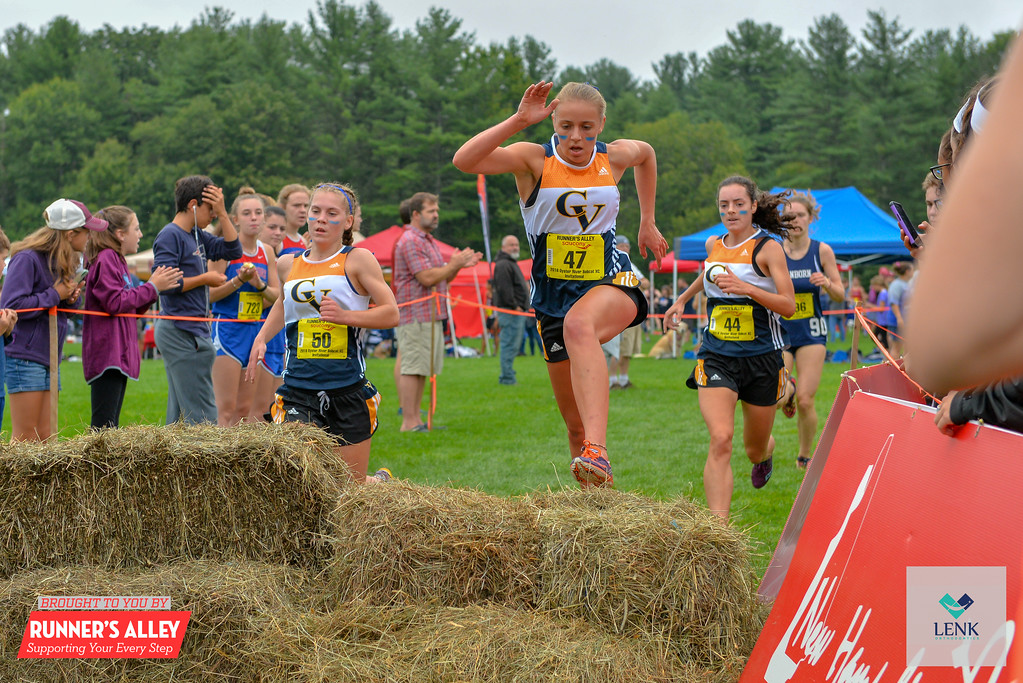 Last year, Coe-Brown was a relative surprise winner of the small school by a relatively comfortable margin over South Kingstown, RI led by individual champ Eleanor Lawler.  Well both Coe-Brown and Lawler are gone this year as the Bears will be competing in the large school race and Lawler has graduated leaving us with the excitement of crowning new team and individual champs.

Can a NH team ascend to the top of the podium again?  NH#4 team Con-Val, led by their terrific trio of Rachel Hurley, Schuyler Michalak, and Clare Veverka is the highest ranked NH team entered.  They are joined by NH #8 Oyster River, which always has a strong pack led by Lily Doody.

Both Con-Val and Oyster River will have to contend with top ranked teams from three other states as CT #4 Immaculate is entered, along with the #5 and #7 ranked teams from both Rhode Island and Maine.  South Kingstown and East Greenwich being the two teams respectively from Rhode Island as well as Yarmouth and Freeport from Maine.  Vermont boasts three ranked schools as U-32 (VT-4), Harwood (VT-6) and Bellows 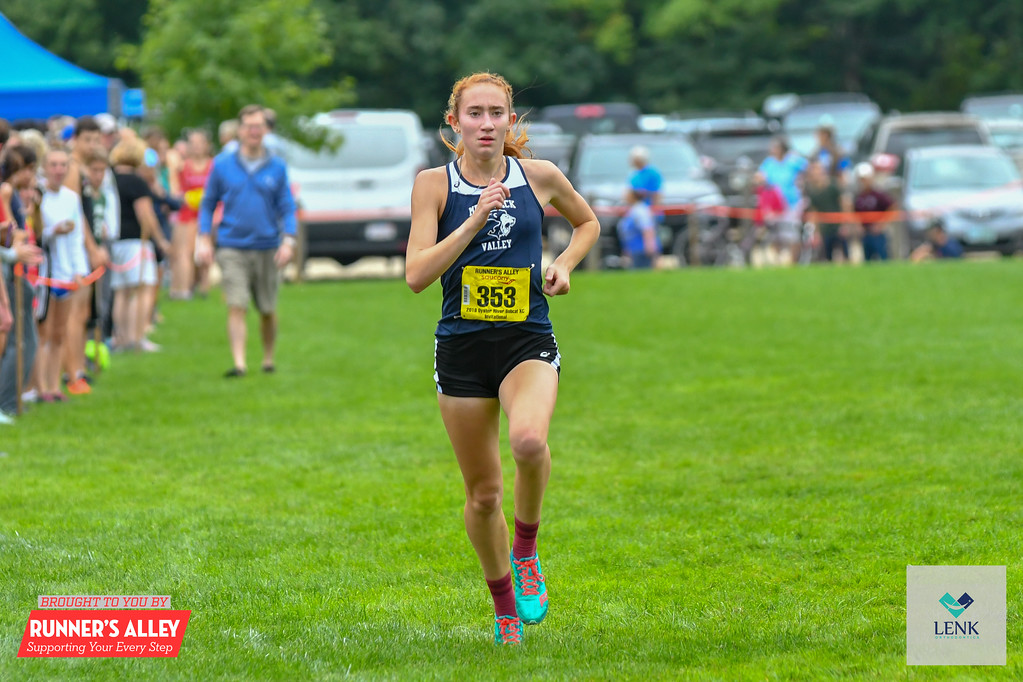 Free Academy (VT-7) are all entered.

Individually, it seems as if it is wide open with the graduation of Lawler; however, Merrimack Valley freshmen Sophia Reynolds is coming off an impressive win at Bobcat over some impressive names.  We are not necessarily naming her as a favorite to win, but we will certainly not be surprised if she pulls this off.  She is an experienced racer even as a freshman and knows this course well.   Challenging her and perhaps the real favorite could be Freeport’s Lily Horne, Maine’s 2017 Class B Champ.  Racing with them in the front pack could be Lana Page and Jesse Colnes from U-32. The chase pack should feature Granite Staters Con-Val’s Hurley, Veverka, Michalak, Belmont’s Alice Riley, Campbell’s Cassie Hemming, Hanover’s Leila Trummel, Hopkinton’s Emma Rothe, OR’s Doody, Monadnock’s Delaney Swanson and PCA’s Liza Corso. Harwood’s Julianne Young, East Greenwich’s Leah Chace, Ana Caleri and Bryn Shunney should also join the chase pack as should Greely’s Carolynn Todd and Marin Provencher, Deering’s Sierra Aponte-Clarke, and Brattleboro’s Sarah Gallagher.

With defending champ Coe-Brown (NH #2) matriculating, if you will, to the Large School Race, the small school division seems to be wide open.  The highest ranked school in their respective state is Greely as they currently occupy the top spot in Maine. Barrington is the number 3 ranked team in Rhode Island behind powerhouses Bishop Hendricken and LaSalle, so expect them to be in the mix.  They placed 4th last year. Also from Rhode Island is the #5 team East Greenwich, which leads us to NH schools. Oyster River (NH#6) seems to be the most intriguing here as their line-up seems to be improving every week.  This week marks the return of Mr. All-Around Athlete, Myles Carrico as he continues to improve his running fitness.  He will continue to close in on sophomore leaders Andy O’Brien and Owen Fleischer which means the Bobcats will only improve.  Upstart Hanover (NH#9) should not be overlooked either as this spirited 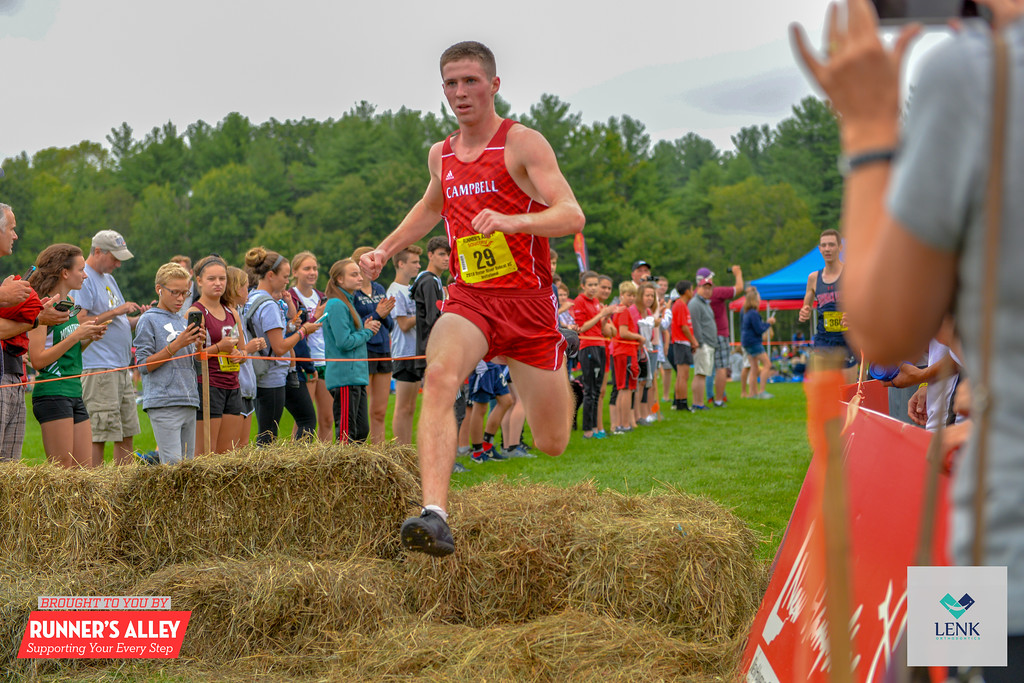 bunch look to make their mark sometime in the 2018 season.

Look out NH!  Individually, are we looking at a repeat of last week’s Bobcat with Campbell’s Jeffrey Allen taking on Bobcat champ MV’s David Reynolds??  It could be real interesting as Reynolds won last week over a relatively flat course.  Could he do the same over the hilly, challenging Derryfield course?  Out-of-staters?  Look for Brendan Magill (Harwood, VT) and Ravi Somvashi (East Greenwich, RI) to join Allen and Reynolds in the front pack.  The chase pack should be full of NH runners including OR runners O’Brien and Fleischer, Con-Val’s Evan Coyne,  Hanover’s Jack Lynch, Sanborn’s Dylan Khalil, and Mascenic duo Landen Vaillancourt and Josh Movsessian.

Last year it was Vermont v. NH as 12 state ranked teams, and all of them from Vermont and NH, 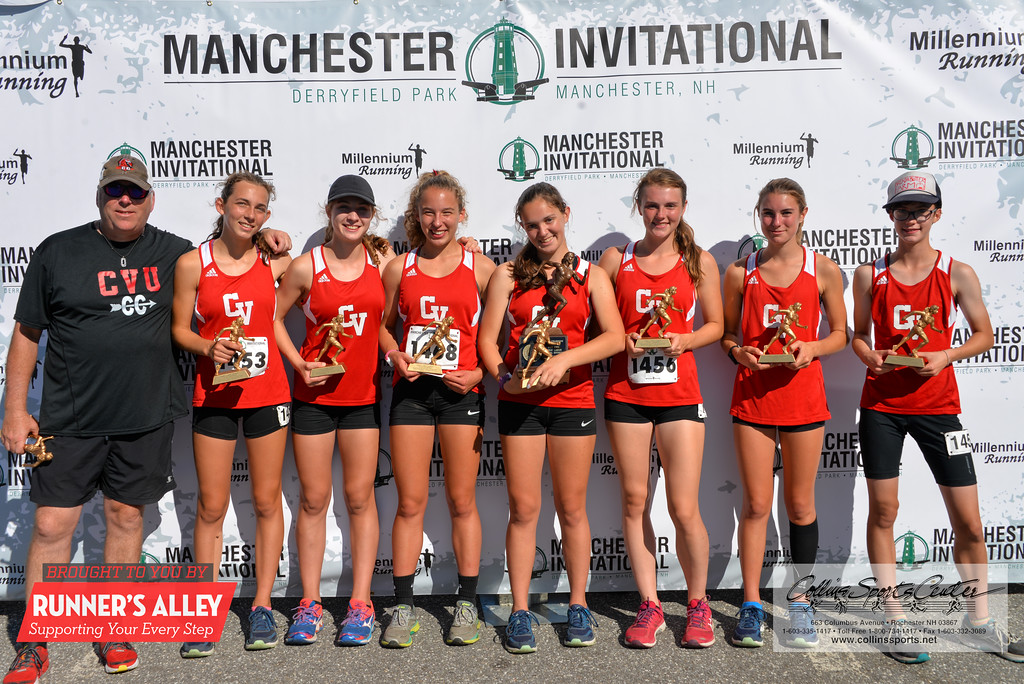 went head to head with Champlain Valley claiming the title.  Well the VT number 1 team is back ready to defend their title along with VT#2 Essex and VT#3 Burlington.  With New Englands being held at Derryfield in November, Connecticut’s number 1 team Glastonbury, led by Grace Sparrow, as well as their #7 team Hall, led by state champ Jenna Zydanowicz, will also be competing along with Maine’s number 1 team Bonny Eagle led by their top runners Ami Beaumier and Delaney Hesler.  Since there are no dominant teams, expect all these teams to be in contention.

With nine ranked schools entered in the Large School race, expect a NH team to challenge for the top of the podium  The real question is which team?  Assuming all rosters are fully represented come Saturday, the defending New England Champs Pinkerton should be the pick to be the biggest challenger to CVU.  Meghan Cross is listed in the entries, but entries also show the Trailblazers will run their freshmen in the freshmen race.  So will it be NH#2 Souhegan?  According to entries, they look to have their full roster competing with freshmen Chloe Trudel, as well as Marissa Romano and Mackenzie Hayden returning to the line-up.  They may currently  be the most complete NH team. 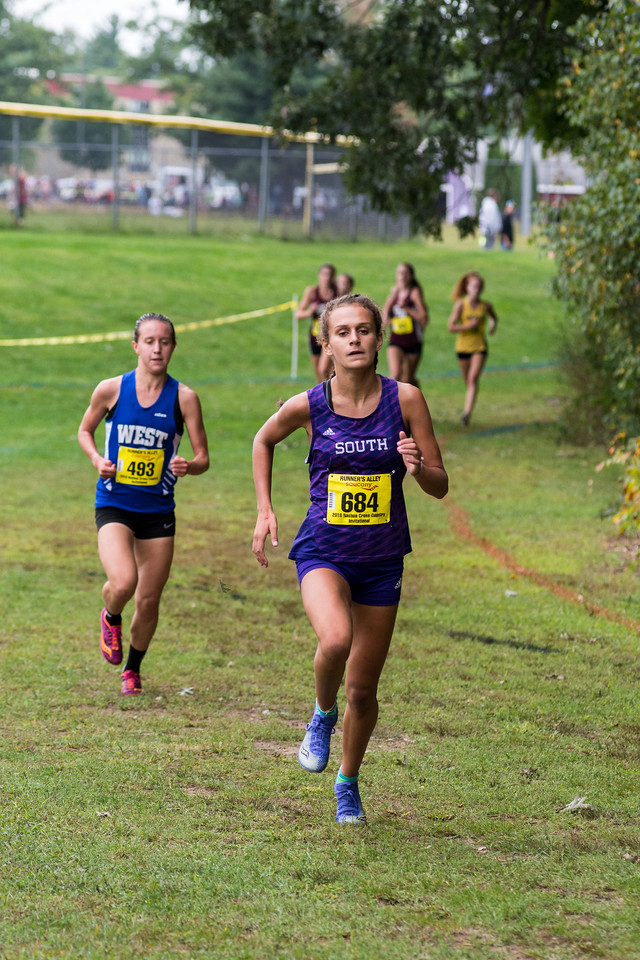 Coe-Brown, NH#3, is coming off a strong win at Cofrin Classic.  Although they return their top three from last year in Addison Cox, Abigail O’Connor and Ella Malone, the rest of their varsity is a bit untested to label as contenders.  Talk about untested, NH’s new #5 team and surprise of the year, Nashua Invitational champ Salem, will be toeing the line with mostly freshmen and sophomores.  This could be a good thing!  NH#6 Concord is also a bit of a surprise, but they are solidly led by sophomore Morgane Orcutt.  Host school Central (NH#7) will look to continue to improve on this level as will NH #10 schools Exeter and Bedford.  NH#9 Bishop Guertin will be interesting to watch as Caroline Fischer is entered to make her 2018 debut.

Individually, this race has the makings of a great one.  Last week South’s Cali Coffin dropped the hammer at Mines Falls laying down a 17:21. Defending New England Champ, West’s Julia Robitaille was second last week, but she ran the identical time as 2017 and we all know how last year turned out for her!  Expect her to improve throughout the season and race with Coffin, especially on the hilly course at Derryfield in her backyard.  Look for a third to crash that party in William Hall’s, 2017 CT Class LL State Champ Zydanowicz.  Expect a large chase pack filled mostly with athletes from the 603 but also by surrounding states.  Billerica’s Hannah Doherty, Bonny Eagle’s Beaumier and Hesler, Burlington’s Quincy Massey-Bierman, CVU’s Alice Larson and Ella Whitman, Coventry’s Caitlin Randal, Glastonbury’s Sparrow, Lowell’s Lindsey Ahern, Pomperaug’s Kate Wiser and Maddie Villa could all be factors here. 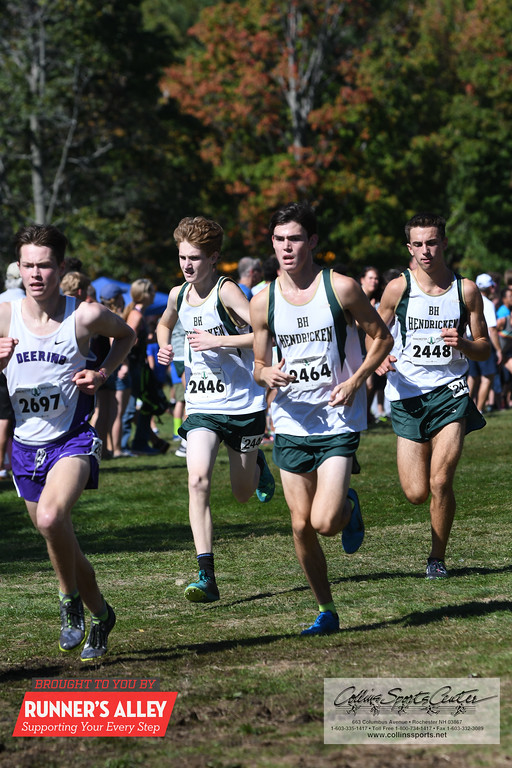 The Boys Large School Race features the two premier powerhouse teams from last year competing to win a New England title this year on this very course.  Defending champs, Rhode Island #1 and Northeast #2 Bishop Hendricken returns almost its entire lineup.  Last year the team had an incredible 6-second spread from 1-5 ranging from 16:34-16:40 to rule the field.  A senior-laden Lowell team finished second place and looks to be on the rebuild ranked #18 in Massachusetts.

NH #1 Concord is much improved over last year and should be able to compete with boys from the Ocean State after a dominant showing at last weekend’s Nashua North Invitational.  Their top five averaged 16:02, a 30 second overall average improvement from the same 2017 race. NH’s other ranked teams, #2 Londonderry, #2 Coe Brown and #4 Winnacunnet all have decent shots at cracking the top five, don’t be surprised if one of these teams catches fire and finds itself in the top three. If nothing, it will definitely clarify the rankings.  It should be noted Londonderry’s Will Heenan is not entered at this time, but the Lancers continue to be one of the deepest teams in NH.

William Hall may be ranked #1 in Connecticut, but it will have its work cut out for them to make the top two spots a reality. CT #4 Danbury, CT #6 Glastonbury and CT #8 Pomperaug will also be representing the dominant Nutmeg state!

Vermont #1 Essex is led by the top Manchester Invitational returnee Henry Farrington.  Farrington, a junior, finished second in the Vermont Division 1 Championships last year and has already run a 15:59 this year. The rest of Vermont’s top six teams will be making the trek to compete #2 Burlington, #3 U-32, #4 Champlain Valley, #5 S. Burlington and #6 St. Johnsbury.

Farrington of Essex Vt. and teammate Peter Alden (4th at VT All States) will have to bring their A-game this year if they intend to be on the podium. Vermont Divison 1 Champion Lucas Calgani of South Burlington should be a top contender for the individual title. Burlington Vt. has Simon Kissam, who placed 4th last year in Manchester, and he’s joined by Kent Ford (6th in VT Division 1) and Wondu Summa (7th in VT Division 1).  U-32 has Andrew Crompton (3rd Division 2) and Waylon Curts (4th Division 2).

The 4th ranked New England Championship returnee Concord’s Forest MacKenzie has run two invitational races in record times of 15:35 and 15:48 this season. He was the Division 1 Champion last year.   Teammate Eli Boesch-Dining, runner-up in Division 1 last year, and in both of these races this season, has posted a 15:41 and 16:01 to his credit.  Pinkerton’s Joe Gagnon placed 3rd at the Nashua Invitational and placed 7th in Division 1 last year.  Nashua North’s Joe Curran was 4th in the Nashua North Invitational and 8th at Division 1.  Also in the chase pack expect to see a sprinkle of Coe-Brown athletes including Dawson Dubois and Luke Tkaczyk as well as Winnacunnet’s Colin Donnelly and Londonderry’s Matt Griffin.

Bishop Hendricken roster includes Jack McMahon, who finished 2nd in the RI All States last year and ran a 15 flat 5000 meters at the New Balance Nationals in spring track.  Aidan Tierney is last year’s RI Class A Champion and placed 3rd at All States, Jonathon Lamarone placed 5th in Class A, and Nick Braz came on late in the season to place 6th in the RI All States.

William Hall Ct. has Anderson Miller who has run a rock-solid 9:24 for the 3200 meter and he isn’t even close to being the fastest on his team, Trey Cormier is.  He could be game changer he has run 9:08 and is on the roster, will he be running? Manchester Ct. freshman Aidan Puffer has run a 15:47 on the roads at the BAA 5K as a 13 year old, so it will be interesting to see how his transition to high school cross country is progressing.

John Mariano of the #17 ranked Xaverian Brothers has run 9:24 for 2 miles and in cross country finished 16th at the rigorous Massachusetts All States.  Lowell’s Jadiel Pinales finished 10th in Division 1 and 21st in All-States.  Don’t overlook Deering Maine’s Alec Troxell who has run under 16 this season as well.

As always, we will be in their in force, snapping pics, recording races and conducting interviews adjacent to our tent.  Good luck to all and welcome to the rest of New England! With Season Previews being drafted and around the corner, NHCC is getting excited!  It is always fun to assess our accuracy with […]