I’m taking over the final blog as the girls team has turned their effort elsewhere (actually they are looking to extend their season through Junior Olympics with the hope to make Nationals).  We got back to work on Monday after a brief debrief of the happenings of D3 Saturday. The boys went out on a controlled negative split tempo run of forty minutes. The girls went out on an easy run with the plan to run a time trial on the MOC course on Wednesday when the boys go over to the course for a course run through.

Tuesday was long run day for the boys and race prep for the girls.  Everyone was efficient as rain hung in the air, making the workout cool and damp.

Wednesday we ventured over to Nashua South and Mine Falls for a run through on the course.  A couple of the guys had been on it two weeks before prior to the TriCounty meet for their younger siblings and this trip looked to have the crew running delineated segments at an uptempo rate while recovering over the rest of the course with some track ripping 200’s at the end to finish things off. But those plans were scrapped instead for a closer investigation of the 180 degree turn out in Mine Falls and some on the canal 200’s.  Thwarted on the Nashua South campus, the girls took the opportunity to explore beyond the MOC course in Mine Falls, enjoying the fine fall afternoon.

Thursday and Friday were thankfully uneventful, as the maintenance runs saw no injuries, likely the biggest 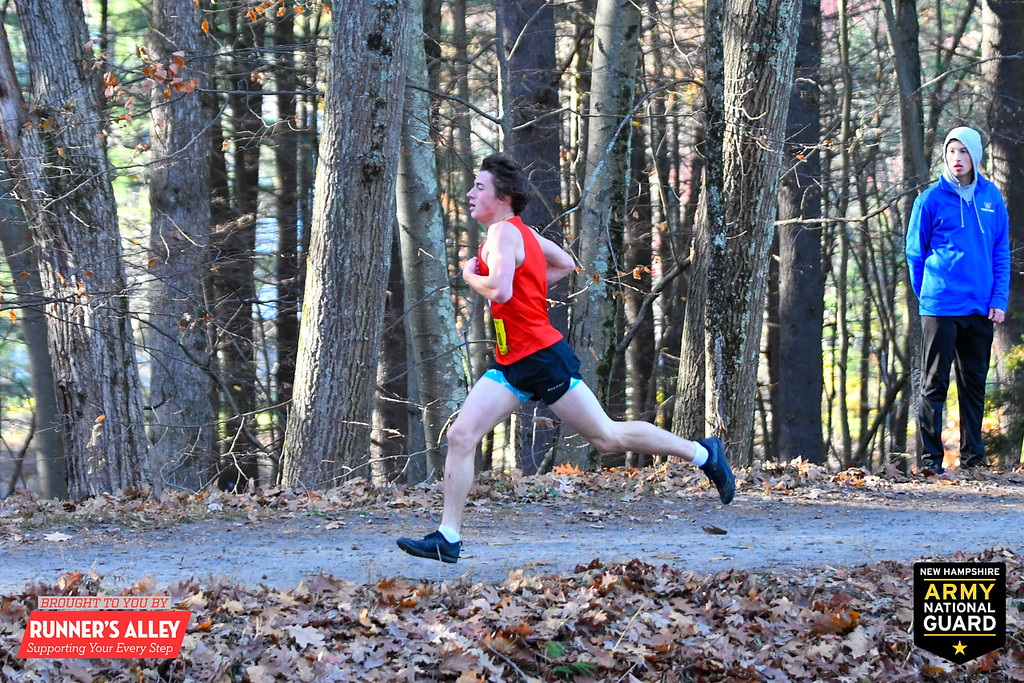 concerns at this part of the season.  Spirits were high, with everyone looking for the opportunity to rip on the notoriously fast MOC course. The goal for the team was to leapfrog into the top ten with our reach goal being a NE berth, but that’s a long shot and they know it.

Saturday morning dawned quite a bit cooler than it was twenty-four hours before, making for some crisp, fall-like weather.  Cross country weather. My MOC day began with a quick run on the course in Mine Falls, then setting up the team tent and switching over to helping NHCC set up the signs down the finishing straight.  Last year we battled high winds, concerned the signs might blow over into the course. This year with the high winds the day before, we were all set on race day.

Upon reflection, race day went pretty well for us.  All seven guys ran PRs, some by huge amounts. While we fell short of our team goal, 7 places out of the top ten, we were ranked 12th from the merge and jumped up a place to eleven.  Also Landen was going for the individual win but considering 15:27 gets you third place, it’s safe to say the racing up front was pretty intense. When they split 4:44 for the first mile, 14:40+ pace, you can’t be too upset with third.

So it’s onto New Englands for Landen for the second time, and some hard earned R&R for the rest of the crew before we crank up for the indoor season. This week started on a rainy Tuesday. And we all know what happens on a rainy day during the Mascenic Cross Country […] Mascenic Cross Country: Week 2  This week was another hot one, but the heat was a bit more manageable. However, that didn’t […] Sarah is a junior who competes for Hollis/Brookline. She recently placed 12th at the Black Bear Invitational. In 2013 Sarah ran 19:48 […]