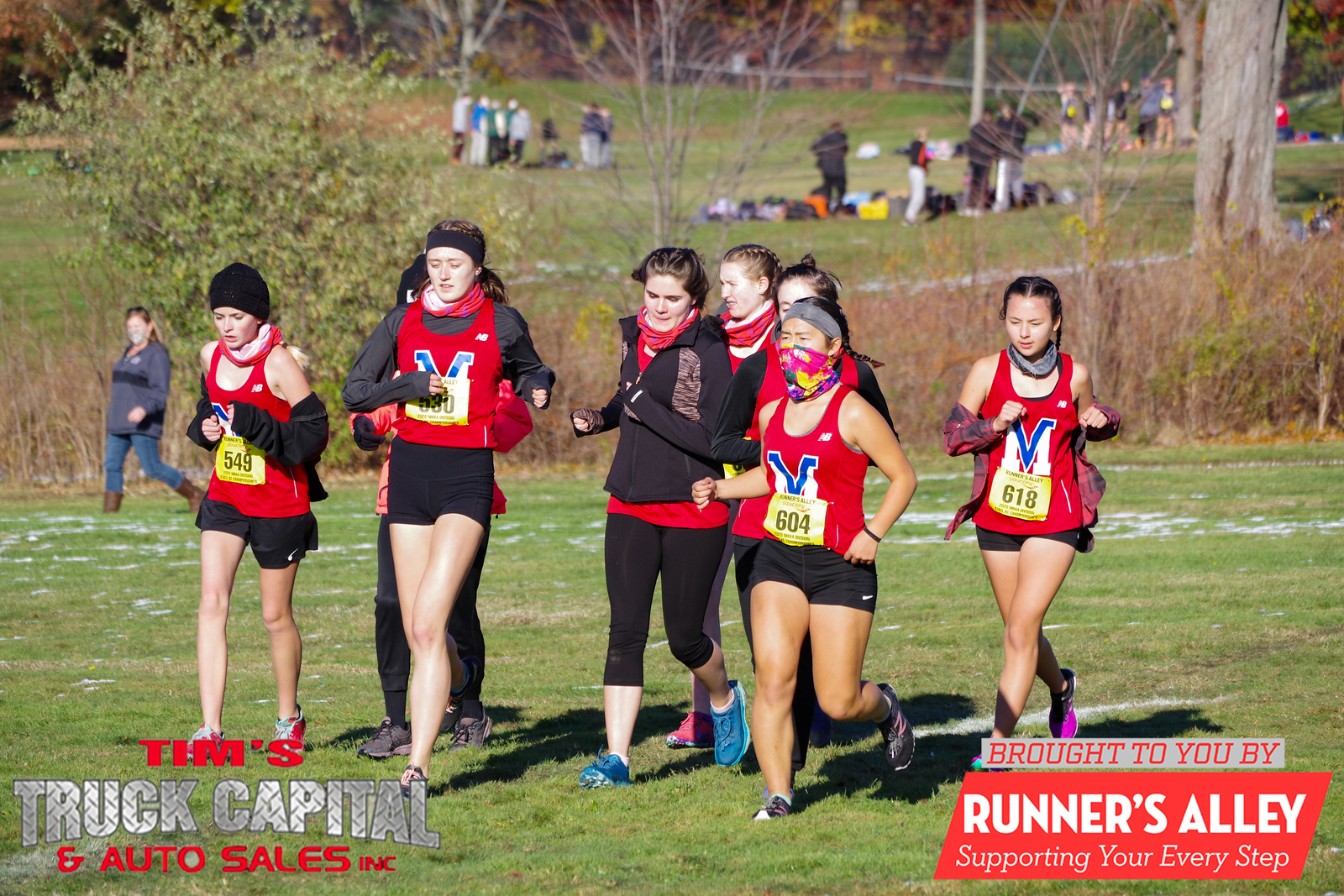 With just the Divisional Championship on Saturday and the JV season over, it’s time to sharpen up for D3s. With the hay in the barn we focus on performance and get ready to run fast on Saturday.

That means we start the week off with a mile on River Road. Starting at the school, we ran down to the A mark on River Road for our warm-up and then started our workout. The goal is to run a fast road mile without the benefit of any splits.  Just run by feel. Obviously everyone wants to beat their mile time from last year and worked really hard to achieve that goal. The freshmen had outstanding performances for doing the workout for the first time. With everyone doing the same thing we stayed masked up for our warm up down to the course.

Tuesday was our “long run” day, 40-50 minutes of easy running. The team split up into groups of the same pace. I ran with 5 freshman girls and Quinn and we explored the areas around the school. Having that time to communicate with each other was good 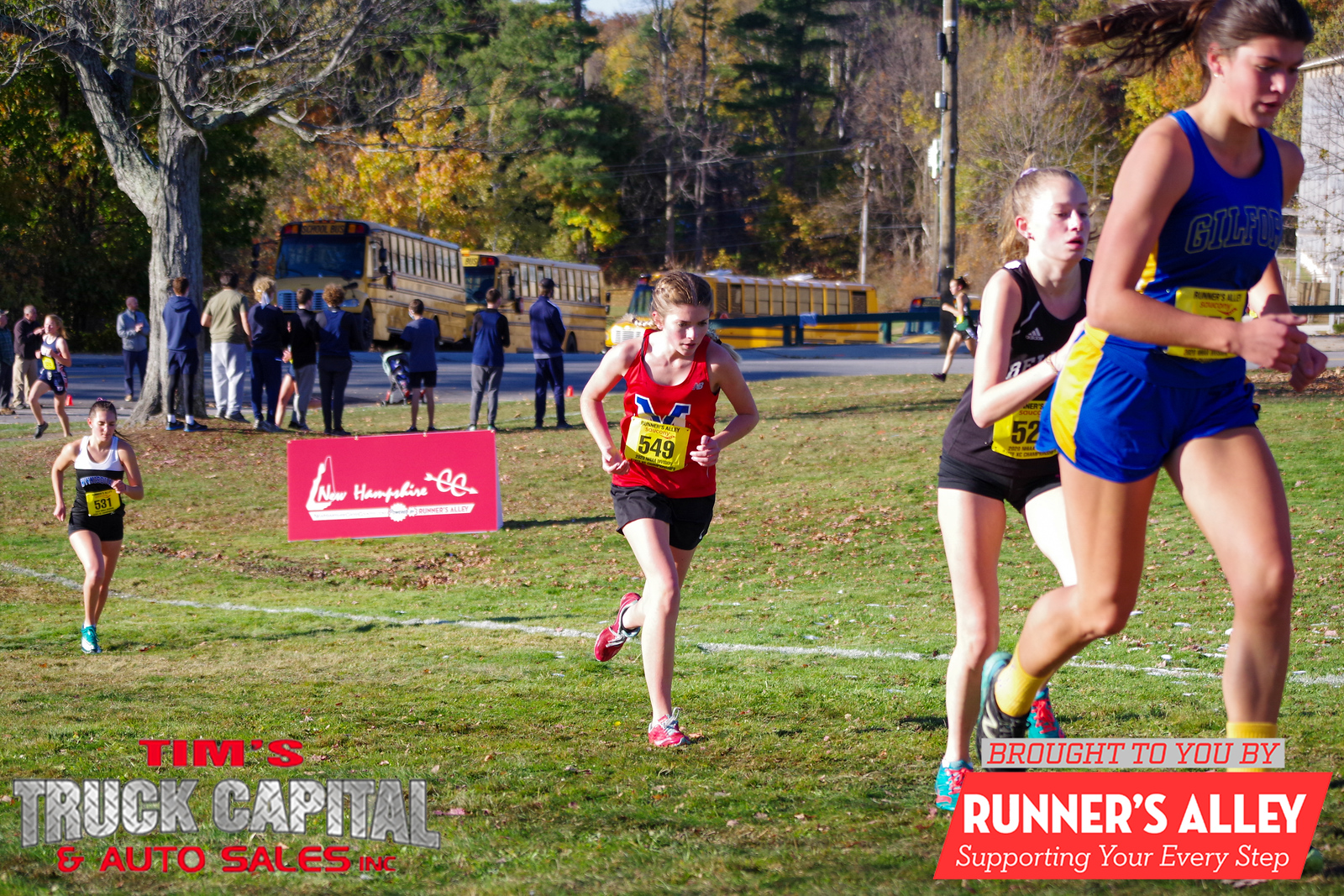 preparation for the upcoming race.

Usually this week we have a pasta party to just kind of wrap up the season.  After dinner Smith gives a speech (hype speech?!) about Saturday’s race, then we have dessert, then senior speeches.  With no pasta party, we had a bonfire to allow for social distancing, and speeches happened around it.  Smith recounted previous seasons and said even with all the turmoil this year, how much he enjoyed coaching this year’s athletes.  Then Syd, Landen and Quinn all gave theirs with the consistent theme being how much they get from cross country and the team.  Not a bad way to go into the rest of the week.

Wednesday was an up tempo 300ś on the course. We started at the top left corner of the field hockey field and finished around 100 meters away from the finish line for the high school cross country course.  While we often do this workout on the track, with the boys soccer team hosting a playoff game we were relegated to the cross course.  Coach Smith called it “course condition simulation” but … 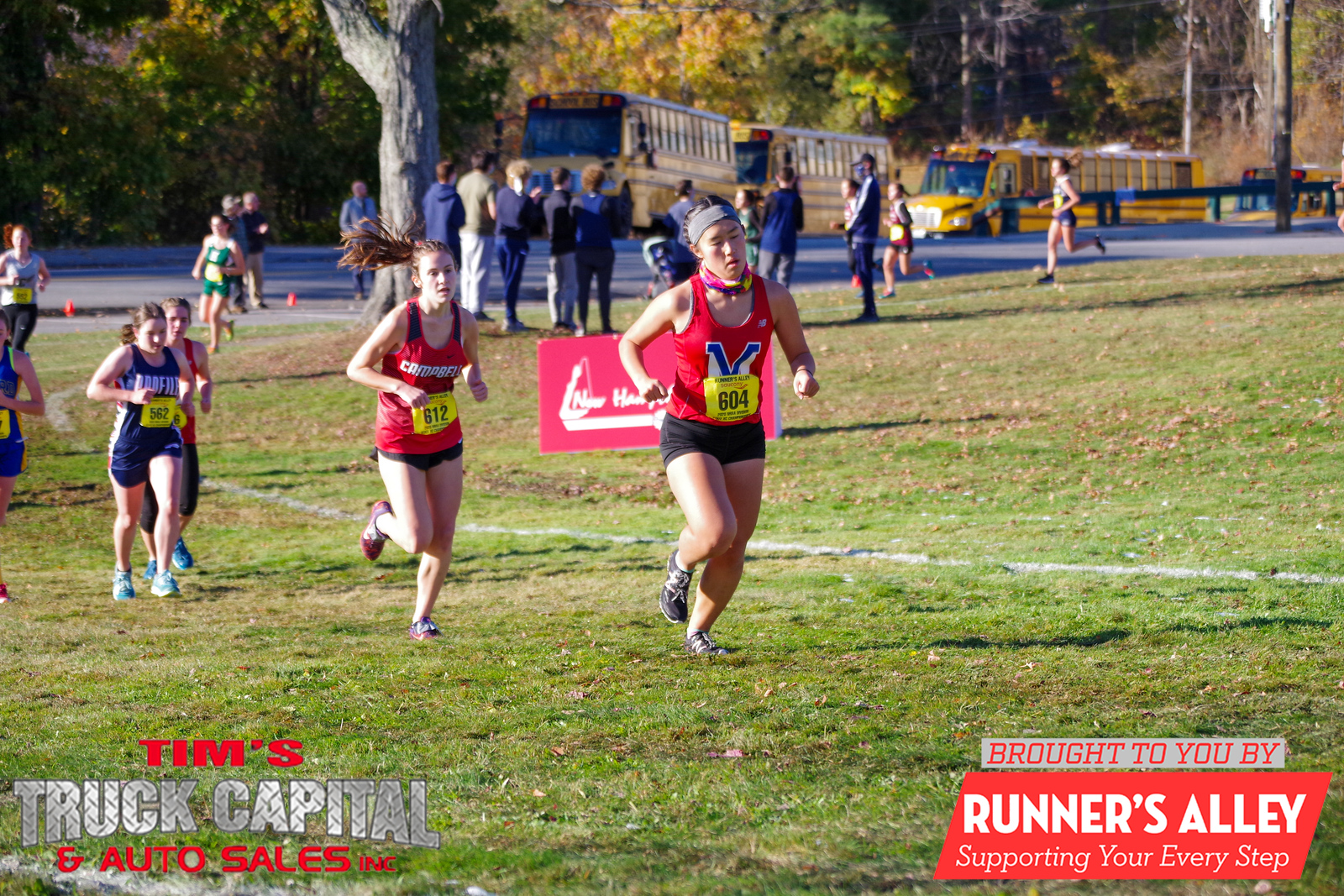 Thursday was some easy mileage and the pre race talk about how to run Derryfield.  Most of us had been on the course over the previous week but it was good to hear where we were supposed to concentrate on passing people and digging in.  We got our final details on Friday as well, as it appeared we might be in for our first snow day of the year on Friday.

And a snow day we had.  Smith had told everyone to find a way to get out for some easy running so my sister and I hit the treadmill to avoid the tricky foot 4 inches of snow made for.  Nothing like a little monkey wrench before the biggest meet of the year.

Saturday was still snowy as we traveled to Derryfield.  The team was in good spirits but you could tell nerves were in the air.  While neither the girls team or boys team finished as high as they wanted, considering this Covid shortened season, we did well and are headed in the right direction.  With the boys as runners up and us finishing 5th, usually enough to move on to the MOCs, it ensures we’ll be hungry next year.

As my girls team finished up with a fifth place and not making it to MOCs thanks to Covid, I take the reins of the final blog.  After an interesting start to the season, with a sense everything could be lost in an instant, I am certainly glad to have made it through the regular season and to get in the Divisionals and Meet of Champions.  Better than I likely imagined back in August.

This week holds no magic for us other than to simply go about business as usual.  With crummy weather at the beginning of the week we kind of turned things around a little bit, electing for an easy shake out run on Monday and the “long run” of 50 minutes on Tuesday.  Our last workout happened on Wednesday with 10×200’s at pace, this time on the cross course.  We usually use the dirt track for this simply to feel like we’re running fast, but the previous days snow still on it at noon time meant the track would be sloppy.  We don’t really have 200 marked out on the course so I found a mostly flat, mostly straight(ish) section and we simply rolled that section with about 200 meters recovery before the next one.

Thursday saw us at Nashua South, this year legitimately, so we were able to run 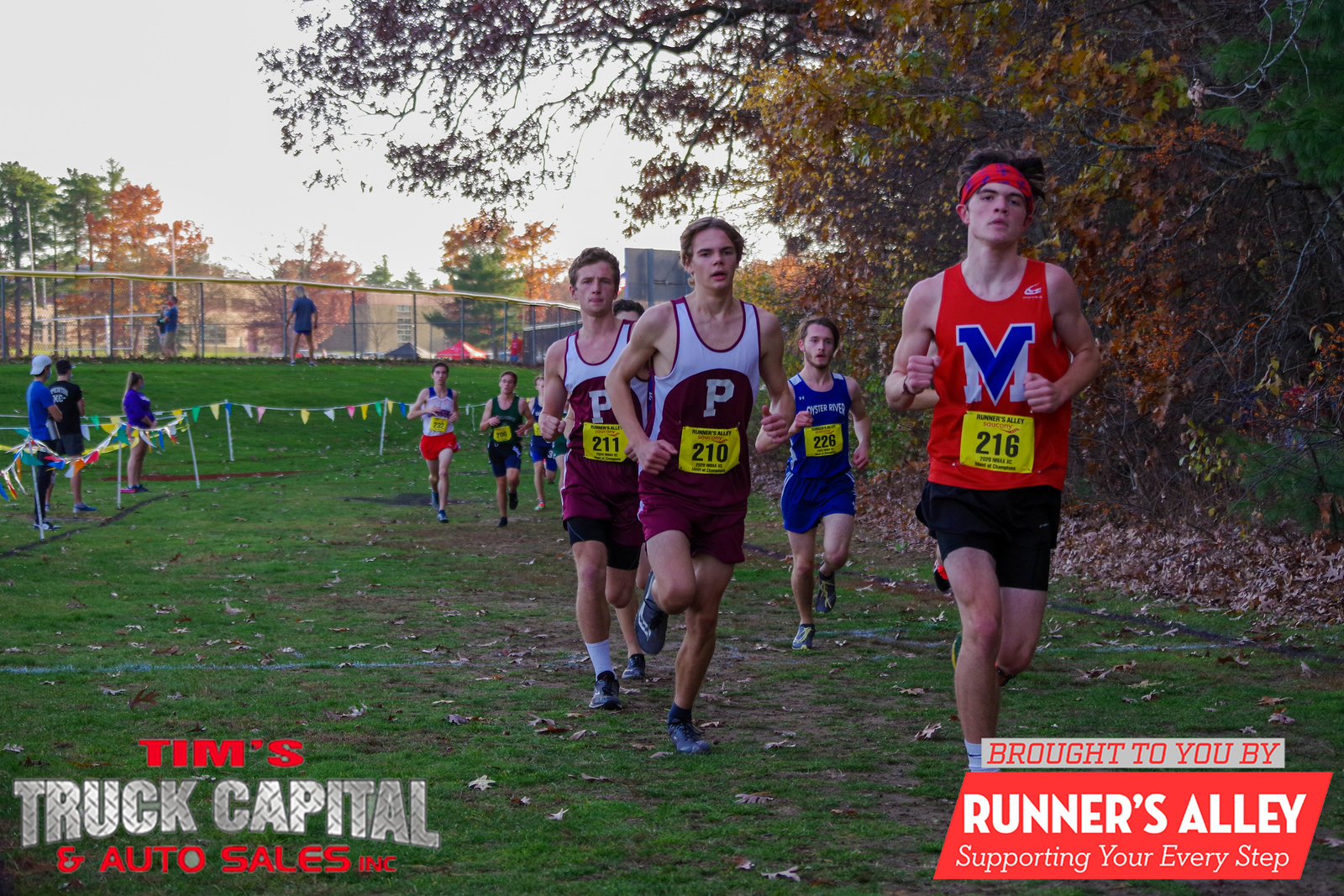 the full course.  I had picked sections I wanted them to run “up-tempo’, places on the course that if your mind wanders, the race can get away from you.  Boys looked good seeming to indicate good races to come on Saturday.

Friday’s practice was an easy 30 minutes with strides and yoga walks before the 24 hours away from teammates to ponder what the next day would bring.

I arrived at the course early on Saturday and by 11 when we started to set up the finishing stretch and get the gear for the livestream set up, the temperature was warm, unseasonably so.  But as the day progressed, the temp seemed to mellow out, indicating a shot at some fast times to come.  The races did not disappoint, with a great girls race between Addison Cox and Chloe Trudel.

In the boys race, even though I have one of the top guys in Landen, I might have to cop to the fact that as Aidan entered the field after coming off the canal I was feeding him information about his position and after him to get on the accelerator.  Pretty excited to see the first sub 15 by a high schooler on NH soil.  Landen gave it a go and can’t be unsatisfied finishing 6th after going for the whole enchilada.  Our boys came in ranked 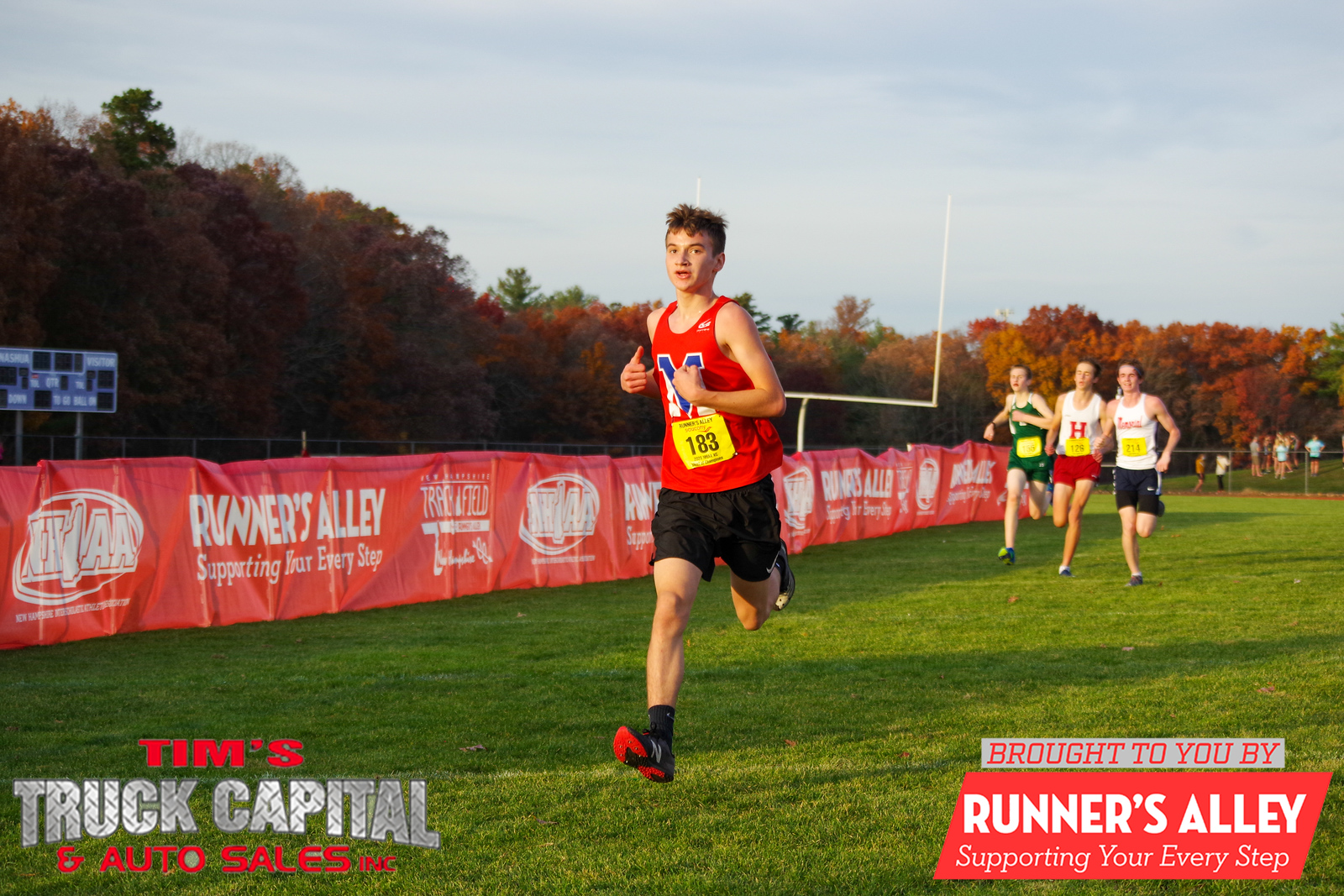 9th, and finished there, with some strong races and fast times to spread around.  We were able to upset Monadnock who snagged the D3 crown the week before with some great team running, so the boys were feeling satisfied.

With no New Englands on the horizon and looking toward next year, I’m encouraged by what our returning runners bring to the table.  We bring back six, can be arguably considered the D3 favorite for the boys and return seven solid on the girls side.  And who knows, with a spring season to season the legs with speed, we could really be ready to rip.

Congratulations to all the various champions across all the divisions and a big thanks to the officials, committee members, coaches, NHCC and everyone else that helped ensure we got this season in.  It was much needed by all those athletes and coaches that had to sit out the spring season due to the pandemic.  Best of luck to everyone as we head for the new year.

Results Link to DirectAthletics While the early season saw temperatures that reminded us of summer, this week saw an abrupt change of seasons and […]

Unlike other sports which select 2-3 teams of all-stars and then honorable mention, in cross country we only pick All-Division, the top […] Volume 4 Week 1 Another year, another volume of Mascenic team blogs. The beginning of our season kicks off every year with […]